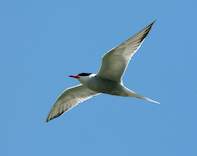 The adult common tern is very pale grey above with a black bar on the shoulder of the wing. The crown is usually a mottled black with a sooty black over the eye and on the back of the head and neck, forehead and throat. The underparts are white, the legs a dark red and the eyes dark brown. The red bill with its black tip is 1½ times the distance between the back of the eye and the front of the forehead. When in breeding the back of the neck, crown and forehead are solid black and the black tip on the bill is lighter.
The immature common tern resembles the adult but the upper parts are a mottled grey and buff. The bill is red at the base and the legs are yellowish.

The call is a sharp screeching ‘pee-err’.

Migrating ringed birds have been recovered along the South African shores from England, Norway, Finland, Denmark and Germany.

The common tern nests on any flat surface close to water including estuaries and beaches. The nest is usually a scrape in sand or gravel, but it is often lined with debris. The female lay up to three dull colored eggs and incubation is by both parents.

The common tern is migratory and thousands are seen offshore.

In South Africa the common tern is an abundant summer visitor.

In South Africa, the Common Tern is found along the coast from August to April in great numbers but individuals may be spotted throughout the year. It is rarely found inland.
©2022 South Africa Online (Pty) Ltd. SouthAfrica.co.za. All Rights Reserved.