In 1984 the Government introduced a Constitution, which was the climax of the policies of exclusion of blacks. The people rejected it unequivocally and August 1984 saw the beginning of the next wave of unrest.

Over 1 200 blacks died since August 1984 and 1986. Blacks are killed mainly by the security forces, almost as if they were flies. Children were detained. Children were killed. It was alleged fifty were shot in the back outside a court.

I did not hear hardly a squeak from the whites who claimed they were concerned for black suffering. That was real actual black suffering, not future possible suffering. They said the state of emergency had been lifted. On Easter Sunday, I saw a Casspir rumbling down Soweto Highway.

On Easter Monday in our part of Soweto, much the most quiet part, four Casspirs and personnel carriers drove past my house. My wife said, 'The border is here' — the troops were still in the townships after the Durban Education Conference which took a brave decision about the children staying in school and we had the insensitivity of the authorities displaying their military might when they know the presence of the troops in the townships was highly provocative.

Together as a Nation 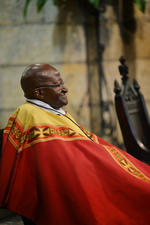 Nothing that Mr Botha said made me believe that he and his Government were serious about dismantling apartheid. He said we are one nation and just as we are rejoicing then he says we are a nation of minorities — unadulterated and dangerous nonsense of bantustans.

If we are one nation, then why should KwaNdebele be going for this spurious independence, why should the people of Moutse die to satisfy a racist ideology? There will be an end to Pass Laws and we say 'Hurrah!' and then we hear that there will be 'orderly urbanisation'.

Since blacks have been artificially stopped from being urbanised, orderly urbanisation will apply to them alone, and so some form of influx control will have to be applied. And then there were the devastating resignations of Dr van Zyl Slabbert and Dr Boraine. The media played down their significance. These two gentlemen were endorsing our long-stated views that Parliament in South Africa was a mere charade.

The PFP have always given the world the illusory impression that we had a parliamentary democracy when we really had a one-party state, which is viciously oppressive and unjust and violent in putting down opposition and dissent. We were banned, detained or charged with high treason!

Our children were dying. Our land was burning and bleeding. There was a great deal of goodwill still in our country between the races. Let us not be so wanton in destroying it. We can live together as one people, one family, black and white together.