How to Make Craft Beer
Beer Making in South Africa

South Africans love a good beer and the popularity of craft beer is on the rise with multiple craft beer breweries in operation and ordinary people making beer at home. Beers can be grouped according to style based on characteristics like flavour, colour, aroma, body and location of origin.
There are over 100 styles of beer: pale ales, wild/sour beers, stouts and pilsners are the names of just a few. Different style groups can usually fit under the main categories of ales (which are heavy with intense flavour) and lagers (which are clean and crisp).

Basic Ingredients of a Craft Beer 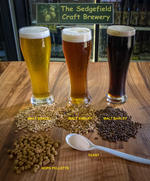 ©Chris Daly
Beer Ingredients.
In order to brew beer you will need water, malted barley, hops and yeast.
Malted barley comes from the barley grain and is obtained through soaking barley in water allowing it to partially germinate. You can do this yourself or buy barley that has already been through the malting process. Malted barley is responsible for producing the sugars needed to sweeten the beer and to react with the yeast to form alcohol.
Hops are the flowers of the Humulus lupulus plant which, when dried and used to brew beer, balance the sweetness from the malted barley, add bitterness, give aroma and flavour and acts as a natural preservative. The effect hops has on the beer depends on when it is added in the brewing process. Adding it earlier will produce a heavier, more bitter beer while adding it later will result in a lighter and more crisp version.
Yeast is responsible for the beer’s alcohol. When added, the yeast converts sugar into alcohol and carbon dioxide. The yeast also adds to the final flavour of the beer and is responsible for the beer’s fruity or spicy notes.

Step One of Brewing - Preparing the Water

The first step to follow when making a craft beer, is preparing the water for the other ingredients. This is done by heating filtered water to 80°C in a hot water tank. After the water is heated it needs to be mixed and processed together with the malted barley. This is usually done in a vessel called a mash tun. The water temperature needs to be adjusted down to 65°C in the mash tun before the malted barley is added. 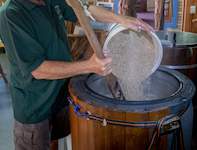 ©Chris Daly
In a mash tun, malted barley is steeped in hot water for an hour to release sugars from the grains. This process is known as mashing. The released sugars are very important because they will turn to alcohol later in the beer brewing process. The sugars also add flavour, aroma, colour and body to the beer as well as sweetness, which is why sweeter beers are often described as “malty”.

©Chris Daly
After the malted barley is mashed, it can be sparged. This process, also known as lautering, is where the sugars are extracted and separated from the grains. Sparging usually takes place in a vessel called a ‘lauter tun’ but can also be performed in the same vessel where the mashing took place. Once the grains are rinsed and all the sugars are extracted from them they are discarded and what remains is a hot liquid called the wort (pronounced “wert”). The wort will eventually become beer and is transferred to another tank to complete the brewing process. 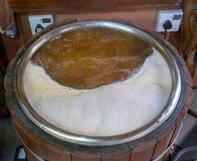 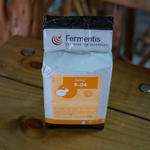 ©Chris Daly
When the wort has been boiling for about an hour it is rapidly cooled so the yeast can be added to the beer safely without being killed by the high temperature.
Once the beer has reached around 22°C the yeast is added. This is known as pitching.
The brewer needs to be very careful and sanitary in this step because possible contaminants such as bacteria and microorganisms can not be killed by high temperatures in this process.
After the yeast is added the beer is ready to go through the fermentation process.

©Chris Daly
Fermentation is where the beer really becomes beer. While the beer is left to ferment, yeast consumes the sugars to produce alcohol and carbon dioxide. After a week the fermentation process is complete and the beer is transferred to another tank for bright beer conditioning. For the next week the beer is conditioned to stabilize its flavour and aroma as well as get the right colour to create a more complete and polished product.

©Chris Daly
By this step the beer is ready to be consumed. All that’s missing is the foamy head and tiny bubbles you see in your glass. For this, carbonation is needed. Carbonation can either be done by directly injecting carbon dioxide into the beer or by adding a small amount of sugar to the bottles that will react with the residual yeast to produce carbon dioxide.

Final Step of Brewing - Getting it Ready

©Chris Daly
The final step in the beer brewing process is putting the finished beer in kegs and bottles, getting it ready to be transported, sold and enjoyed by beer drinkers everywhere.
©2020 South Africa Online (Pty) Ltd. SouthAfrica.co.za. All Rights Reserved.