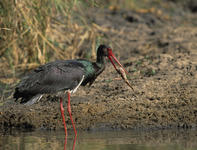 The adult black stork has shiny black feathers, with white underparts, long red legs and a long pointed red beak. The immature bird is blackish-brown, not shiny, and the legs are greenish-red.

They mostly eat fish but micromammals, reptiles, shellfish and insects complete their diet.

One brood is brought up during a year. At first young birds are rather weak and they can’t sit upright. Most of them are the same height, only those that hatched later or were ailing are rather shorter. Some of the weaker young die and are thrown out of the nest. At this time the immature black storks are noisy and aggressive, especially when somebody approaches the nest. A baby black stork is covered with white down and has a yellowish or yellowish-orange beak. Their feathers grow in completely when they are 46-50 days old and become adult-like.

At first parents place food into the beaks of the young, later they take it from the beaks of the adults and from the nest. This can be small fish, frogs, lizards, mice, voles, shrews, insects that live in the water and their larvae as well as birds that hatch on the ground. Young storks feed on molluscs that live in the grasses, moss, and, especially, water plants. The young leave the nest when they are 60-66 days old and then the family looks for food farther from the nest.

Unlike the white stork, which is a bird from the countryside and the steppes, the black stork is above all a forest species in South Africa. They settle in old quiet forests where the nest is placed on a big tree, often near an open space (slopes, clear forests), which allows them an easy access. They forage in the shallow water of streams, small rivers, marshy ponds and meadows with low vegetation. Couples are always several kilometres apart from one another.

While most of the world population of black storks are Palearctic migrants, the population in South Africa is resident year round.

They can be seen in the southern parts of Africa and parts of Europe. Black storks are found throughout South Africa and are best seen in mountainous regions.
©2019 South Africa Online (Pty) Ltd. SouthAfrica.co.za. All Rights Reserved.