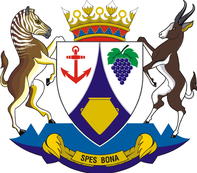 From the base is a shield, which contains an anchor, a bunch of grapes and in the centre a clay pot. The anchor represents hope, stability, faith and the provinces maritime history. The grapes represent the importance of agriculture and of course wine production in the Western Cape. The clay pot symbolises manufacturing and as an artefact of the early inhabitants of the Cape, the Khoi.

Supporting the shield there is a Quagga (Equus quagga quagga) and, the Bontebok (Damaliscus dorcas dorcas), both of which are indigenous to the province.

The quagga is currently extinct, but research is underway with a specialised breeding programme with the aim of producing a new population of them.

The bontebok was at one time close to extinction but now has a viable population. On top of the shield is a coronet, which is made up of a beaded heading, as once worn by the San, a protea, which represents the fynbos found in the province and rings which are symbolic of perfection, as they have no end and no beginning.

The new coat of arms serves to enhance the identity and dignity of the Western Cape.