Women in particular epitomize and reflect the unchanging ethos of the Ntwana. Their modes of dress, the objects they produce and the rites they perform reinforce their role as the upholders of tradition and sustainers of the rural economy in the face of urbanization and in the absence of their menfolk, most of whom have been absorbed into the migrant labour system. As closer examination of this virtually unrecorded group reveals, their identity as a distinct cultural group is inextricably bonded to both the distant and recent history of South Africa.

Although the shape of the frontal apron (thetho) worn by both Ntwana and Pedi women is identical, it differs in terms of decoration. Unlike Pedi pelts, which are incised with cross-hatched patterns, the surface of Ntwana aprons is usually smooth except for the presence of standardized decorative motifs.

Produced from goatskin or occasionally oxhide, the frontal and rear aprons symbolize the most significant stage of the Ntwana woman's life: her marital status and consequently her acceptance as an adult woman in the community. The frontal apron is sparsely decorated; their most commonly recurring adornment is the sehlora ('squirrel's tail'): a rosette-like motif with concentric circles usually decorated with white beads on the outside, black or blue on the inner circles, and red and white in the centre.

The sehlora appears to have great significance to the Ntwana as it recurs on most of their traditional regalia, and is worn on the head. The rear apron (ntepa) worn by Ntwana women is shaped into an inverted V formed by a triangular gap framed by two tapering leather flaps (lekobe). Among the Pedi, this form has been interpreted as representing female genitalia but Ntwana scholars believe it represents the hind legs of a goat. Both suggest associations with female fertility.

The emphasis on Ntwana women's central role as childbearers finds its most visible form in the gimwane or popenyane — a traditional fertility doll constructed from plaited sisal, wool and beads. The skills to produce these dolls are passed down from mother to daughter. Little girls pretend the dolls are the progeny of their boyfriends, who are invited to participate in a dance competition, the outcome of which determines the leader of the prepubescent group.

The young boys usually congregate at the home of one of the girls, who places each gimwane in a line. The 'fathers' and 'mothers' form two rows on either side of the dolls and dance with their partners. The winner, as judged by a parent, receives a goatskin as a trophy. Often the other boys subsequently stage a fighting contest to confirm the real leader among them. The coloured beaded waistbands around the lower half of the gimwane are usually arranged in a traditional uniform colour pattern: two white bands on top, followed by one red, one blue, one pink and sometimes one white band at the bottom.

This colour arrangement approximates that worn by initiated and married Ntwana women around their waists. White, red and blue or black are common colours among the Ntwana because of their associations with soil-types (such as ochre for red), which are believed to possess magical, healing powers. 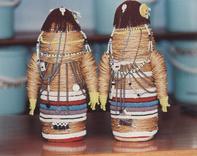 Although the fertility dolls have no specific sexual articulation, the gender of some gimwane may be determined by the shapes of their frontal and rear aprons. Male gimwane tend to have rectangular loincloths while the female dolls may be identified by the V-shaped aprons which resemble the ntepana (rear aprons) worn by uninitiated Ntwana girls.

Such traditional features are becoming increasingly rare on the gimwane dolls, in contrast to the profusion of ornamentation found on the more recently produced dolls. This is due largely to the fact that the gimwane is no longer invested with cultural symbolism. It has become increasingly commodified, and adapted or modified to suit the desire for decorativeness on the part of its mainly white market.