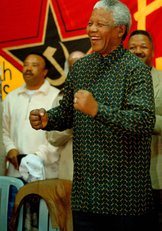 The late Piet Beyleveld was a leader in the Springbok Legion, the organisation of Second World War ex-servicemen which was taken over by communists. He was later president of the Congress of Democrats, the communist front group for whites set up as part of the Congress Alliance with the ANC. Beyleveld was an amiable fellow, honest and well-intentioned in his opposition to apartheid.

The Security Police detained him and he turned against his former comrades: he admitted he had been a member of the party since 1956 and became a witness for the prosecution to get them jailed. Some time afterwards I went to talk to him.

e spoke freely and described the last secret party conference he had attended, in a house in Johannesburg, early in the 1960s. He offered the information that Mandela had been there and, he believed, had even been elected to membership of the central committee. He said the balloting was secret and the committee's names were not supposed to be known even in party circles.

At the time, this information was dynamite. The government was desperate to prove that Mandela was or had been a communist.

But I did not report Beyleveld's information and instead locked it away in my mind: I did not know to what extent the Security Police had turned him into a cat's paw and I was determined not to let them use me to smear Mandela. The story remained a puzzle.

Then, in 2007, Padraig O'Malley, in his biography of Mac Maharaj, who was jailed with Mandela, quotes party members as saying that Mandela, for a short time, was indeed a member. So it turns out, more than forty years later, that Piet Beyleveld told me the truth.