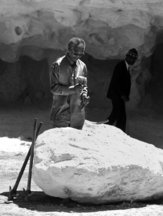 The 1994 election ended 342 years of rule by white men, men imbued with the notion that their whiteness and their European origins gave them the right to rule without consultation over the millions of black people who inhabited South Africa.

The transformation was remarkable because of the peaceful manner in which it occurred after the bombs had ceased and because of the depth of character of the person who did most to make it happen. Revolutions have been sparked by a variety of events and circumstances.

It would be difficult to recall another one that started with a prisoner serving a life sentence in a country ruled by a dictatorial regime and with no more power than the moral authority of his quest. From this unlikely bargaining base, Prisoner Mandela suggested to the country's political leaders that they should enter into negotiations with the black majority to end apartheid.

It is the stuff of impossible romantic dreams — one man, seemingly puny in his bondage, having the temerity to suggest to his jailers that they surrender the power they wielded and acquiesce in a process that could have only one outcome: the handing over of authority to the people they had oppressed.

The alternative was what history normally decreed: the holding on by the rulers of their all, no matter the cost, until both sides had come near to destroying each other in civil war, leaving the victors to face the enormous task of trying to govern while rebuilding a shattered nation.

South Africa's 40-million people have avoided that fate, largely due to the courage, determination, imagination and force of personality of Prisoner Mandela. Undoubtedly, the then President Frederik Willem de Klerk was a key figure in the process.

But De Klerk had correctly read the signs. He knew that if his government persisted with apartheid and domination the country would disintegrate, first economically then into civil chaos.

Prisoner Mandela brought to the discussions talents that he had honed in prison. He exercised iron self-discipline, never lost sight of his cause and used every opportunity for study.

Under his leadership the prisoners developed communication systems among themselves and with the ANC leadership in exile ovérseas. Using similar channels the prisoners were also kept abreast of important political developments "outside". He also wrote his autobiography, "Long Walk to Freedom", which was copied in tiny writing by two fellow prisoners and eventually spirited to safety by fellow prisoner Mac Maharaj.

The government tried to break down his resistance by offering him release — in the 1970s — in exchange for his recognising the so-called "independent black homeland" of Transkei and allowing himself to be confined within its borders.

Had he accepted he would have given his approval to "Grand Apartheid", the policy of dividing the country into several black tribal enclaves where blacks would have "governed themselves". Mandela bluntly refused. So the government gave up on that tactic, but in the 1980s made another tempting offer to release him on condition that he renounce violence.

He retorted that "prisoners cannot enter contracts" and listed demands that the government stop warring on black people. It was a tempting offer because by then Mandela had been in jail for more than 20 years. The same offer was extended to his fellow prisoners, and it says much for the unity of purpose that he inspired and their courage that only one succumbed.

His master stroke was to send a message to the government offering to enter into negotiations for the ending of apartheid and the transformation of South Africa into a democracy.

The timing was impeccable. Sanctions against the country were damaging the economy and isolating South Africa from technological advancement and meaningful contact overseas; internally, dissent and anti-apartheid activity were on an ever-rising crescendo, boycotts and demonstrations were crippling the administration and the ANC policy of making the country ungovernable was becoming more of a reality every day. There were constant outbreaks of violence.

Behind the granite-like facade of apartheid, the National Party establishment was becoming uneasy and uncertain. The secret Afrikaner mafia behind the government, the Afrikaner Broederbond, which since the early strivings of the Nationalists had formulated policy and helped to put it into effect by instructing its members in the cabinet and other key areas, was on the point of making a vital decision — to scrap apartheid.