Pests and Diseases of Bees
Beekeeping in South Africa

© Chris Daly
The small hive beetle is a pest that originated in Africa and has spread worldwide.

Being knowledgeable about honeybee pests and diseases is important for beekeepers to ensure healthier swarms and better quality bee-related products.
To control and manage bee diseases, all hives should be registered and any disease or pest be reported to your local beekeeper association.
This summary of the most important pests and diseases of bees in South Africa is based on research material on plant protection research of the Agricultural Research Council (ARC).

©Jrmgkia
American foulbrood is extremely contagious and infected hives should be burnt to prevent the disease spreading.
The highly contagious American foulbrood (AFB) is caused by the bacterium Paenibacillus larvae is extremely difficult to eradicate and can cause severe losses for beekeepers.
Signs of disease: The dead larvae have a foul smell. Infected colonies have scattered and uneven brood patterns with dark, greasy looking and sunken cappings.

This disease affects the digestive system of adult honeybees and is caused by the protozoan Malpighamoeba mellificae. Although not yet detected in South Africa (2018), it has been found in Zimbabwe.

©Jeff Pettis, Bugwood
Chalkbrood mummies at the entrance of a beehive. The dead larvae are expelled from the hive by hygienic worker bees.
The fungus Ascosphaera apis, which causes chalkbrood only attacks the bee larvae. Young infected larvae do not usually show signs of disease but will die upon being sealed in their cells as pupae. Worker bees uncap the cells and find the dead larvae, often moving them to the hive’s entrance, making these dead larvae, (mummies) clearly visible.
Signs of disease: Beekeepers will often recognise the disease when seeing these 'popped rice' mummies at the entrance of the infected hives.

©National beekeeping unit
European Foulbrood. Note the infected combed with larvae in the 'melted' appearance.
European foulbrood (EFB) is a bacterial disease that affects honey bee larvae before the capped stage. Although not serious, EFB is the most common bee disease in South Africa and is caused by the bacterium Melissococcus pluton. It is suspected that the bacterium is present (but latent) in most colonies and is triggered when a colony is under stress.
Signs of disease: dead or dying larvae curled upwards, yellow or brown, melted to the sides of the cells or dried out and rubbery.
Although found in all South African provinces, infections seem to be more severe in high humidity areas such as Limpopo and coastal KwaZulu-Natal.

Nosema is a disease caused by Nosema apis, affecting the gut and nutrient absorption of the adult bees. This results in less brood food being produced and can result in up to 15% fewer larvae developing.
Signs of disease: The disease can be microscopically diagnosed but symptoms of heavily infected colonies may include clumsy and lethargic bees with swollen abdomens. Also, brown diarrhoea can be seen on combs and hive.
Nosema occurs in all South African provinces, but has not been linked to colony deaths.

©Gilles San Martin
Varroa destructor on a bee nymph.
The tiny red-brown ectoparasitic Varroa destructor mite is the most serious parasite of honeybees causing malformation and weakening of honey bees. It was spread from its natural host, the Eastern honeybee (Apis cerana) to the Western honeybee (Apis mellifera).
Varroa mites are external parasites that attack both adult honey bees and larvae, but the mites’ relationship with viruses (causing secondary infections) complicates the mechanism of the disease and subsequent treatment of this serious bee disease.
Colonies infested with high numbers of varroa also have problems with other bee diseases and pests such as small hive beetles, chalkbrood and Braula coeca (a wingless fly).
Signs of disease: Poor brood patterns and scattered brood, sunken and chewed cappings and larvae slumped in the bottom or side of the cell. In adult bees - crippled and crawling honey bees, poor flight.
Bayvarol® and Apivar® may be used to fight Varroa destructor in South Africa.

Acarine disease in bees is caused by the tiny tracheal mite, Acarapis woodi. These mites pierce the bee’s windpipe (trachea) and feed on the haemolymph (bee ‘blood’).
Signs of disease: There are no reliable indicators or symptoms of mite infestation as symptoms are also associated with Nosema infection and some viruses.
Tracheal mites have been associated with disjointed “K” wings, bees crawling on the ground near a hive, unable to fly.
The mites are tiny and must be microscopically identified. They are found in low numbers in all South Africa’s provinces.

The burrowing larvae of the wax moth (Galleria mellonella) leave a matted mass of silk trails and destroy the entire comb. Strong bee colonies may be able to control the population of moths. Hives in cold regions or at higher altitudes are less susceptible to wax moth infestations. 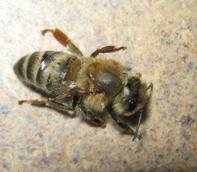 ©Xolani90
Example of deformed wing virus in a honeybee. Note the stumpy, useless wings, deformed abdomen, leg paralysis, and weakness of the neck muscles.
Virus infections in bees are often linked to Varroa mites and may show symptoms when colonies are weakened due to stress.
Sacbrood virus (SBV) is a well-known viral bee disease with recognisable symptoms.
Signs of disease: The outer layer surrounding the larva fills with a clear liquid, while the underdeveloped head darkens. Sacbrood can also be recognised by an uneven brood pattern with sunken, discoloured and perforated cappings with jagged edges.
Severe infection of chronic bee paralysis virus (CBPV) and acute bee paralysis virus (ABPV) will show bees crawling on the hive floor and in front of the hive. Death follows within days.
Affected bees are seen on top of frames; uncoordinated, trembling and unable to fly - similar to Nosema infection.