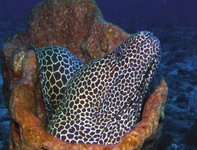 Others in the Family

Muraenidae family consists of 15 genera and 200 species. Usually found in rock crevices or under ledges. Hunts mostly at night. Possessing a very good sense of smell. They have pharyngeal jaws, which is a second set of jaws situated in the throat which helps with holding the prey and feeding it down the throat. Some species secrete toxic mucus from their skins. Moray eel bites can infect quickly because of the bacteria on their teeth. Pelagic spawners.