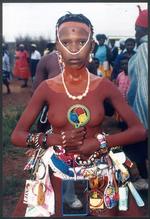 ©Dr Peter Magubane
A Basotho woman who has gone through initiation is eligible for marriage.

Arranged marriages used to be common among Basotho leaders and chief's children, ancestry and kinship connections were important to regulate social and legal relations. The boy's father usually proposed by approaching the girl's parents. If they were receptive, he asked for a calabash of water.

If her parents consented, the boy, with a few friends, formally visited the girl. If she agreed to the match, she gave him a scarf 'moqhaka'. She normally offered him food which he declined, lest it be said that 'he came for food not love'. Although the couple might not have met before, they usually approved the choice made, but in earlier times they had to go through with the marriage whether they liked it or not.

More recently greater leniency has developed — today individual choice is the norm and many unmarried women become mothers. In the past, marriage was formalized by the transfer of bohali 'bride wealth' from the groom's kin group to the bride's. Payments of cattle and other livestock signified that children would be of the father's clan and kin group, and not the mother's.

The number of bohali was more or less fixed at 20 cattle, one horse, and 10 sheep or goats, but it was seldom paid in full. After a transfer of up to 10 cattle, further payments helped ally the two kin groups in bonds of reciprocity and friendship. In the past, a wedding would normally be held shortly after the marriage was arranged.

Until then, the couple was not supposed to have sexual intercourse or live together. Today many marriages occur after elopement or when the man and his friends abduct 'shobela' his chosen girl and take her to his home, where she is welcomed as if a wedding had taken place. An animal may even be slaughtered to mark the occasion, while the bride's trousseau is sent after her.

Today a new couple still does not expect to have its own homestead. The bride lives with the groom's parents. She cooks, helps with chores, and works in the fields, at all times obeying rules of respect 'hlonipho' for her father-in-law that include not saying his name or any word that sounds similar to it.

In the past a man could apply for land and a building site at the start of the first season after marriage, and slowly the new household's independence in the extended family structure developed. Pressure on land today means that he may wait far longer than a year. However, many brides resist this, and demand their own households immediately upon marriage.