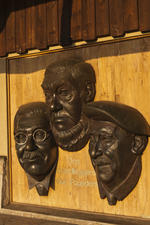 The first intake of rangers, for the newly formed Sabi Reserve, which later became the Kruger National Park, was assembled on an ad-hoc basis during the first few years of the park’s existence. They were all English-speaking and most had some hunting experience in the Lowveld.

The first to be employed was the loyal Harry Wolhuter, based at Pretoriuskop. He would remain in the park for the next 40 years (retiring at the same time as James Stevenson-Hamilton).

This was the so-called ‘First Guard’ and they, along with James Stevenson - Hamilton and their ‘native police’, can legitimately claim to be the park’s founding fathers.

Their original rangers’ stations also live on as today’s tourist rest camps. But this was not an all-male environment. Although it was preferable for rangers to be unmarried, several had wives and children who had to cope with very trying circumstances.

One of the first extensions to the Kruger National Park was the result of a generous donation from a stern-eyed, old battle-axe named Eileen Orpen. She was part of the wealthy Barry family, a trading dynasty based in Swellendam....more

James Stevenson-Hamilton, or JSH, is both an iconic and iconoclastic figure in the history of the Kruger National Park. Due in no small part to his redoubtable strength and passion that we have the financially healthy and biologically wealthy Kruger Park...more

Back in August of 1903, Wolhuter was returning from a research trip to the Olifants River. One of the most enduring ranger stories about the Kruger National Park involves the redoubtable Harry Wolhuter and his thrilling encounter with a determined lion....more

Joao Albasini was born in 1813, on board a ship in the bay of Oporto. His father was Italian and his mother was Spanish, but Joao became a Portuguese citizen by birth. He travelled to Portuguese East Africa (Mozambique) with his father when he was 19...more
©2022 South Africa Online (Pty) Ltd. SouthAfrica.co.za. All Rights Reserved.