One of the most enduring ranger stories about the Kruger National Park involves the redoubtable Harry Wolhuter and his thrilling encounter with a determined lion. Back in August of 1903, Wolhuter was returning from a research trip to the Olifants River.

After camping near N’wanesti (now a picnic site), Wolhuter awoke on the morning of the 26th and struck camp. His destination was Metsimetsi (now a campsite), about 20 miles to the south. He was travelling with several donkeys and a small staff of African police, but they were moving slowly and it was getting late, so he decided to ride on ahead with only his dog and a horse for company.

As the sun started to sink, Wolhuter found himself in the darkling bush, several miles away from his destination. The bush is a dangerous place at dusk, as this is the time when predators are at their most active and the land is full of shadows. Nevertheless, he pushed on through the twilight. Then, as he was crossing a dry river bed, his dog began barking at a black shape lurking in the vegetation. At first, Wolhuter thought it was a reedbuck but then it started moving towards him, approaching on the right flank.

This was pretty strange behaviour for a reedbuck and, just as he was pondering the peculiarity of nature, the animal broke from its cover and revealed itself to be a lion. The lion charged at Wolhuter, who sharply pulled his horse to the left. The lion leapt and caught the horse’s hindquarters in its sharp claws. The horse bolted and Wolhuter fell heavily to the ground. He was dazed for a moment, but looked up in time to see the lion chasing off after his frantic horse, with the dog in hot pursuit.

Wolhuter then noticed a second lion, sneaking up on him from behind. Before he had a chance to think, the lion sprang on the defenceless man and sunk its teeth into Wolhuter’s right shoulder. It then started dragging him away to a dark spot where the feeding would begin. Wolhuter, still conscious, found his face pressed into the lion’s musky chest. His feet were under its belly, heels bumping across the stony ground.

Wolhuter remembered his sheath knife, which he always carried in his belt. He reached around with his left hand and blindly fumbled for the knife, hoping that it had not been dislodged when he fell from his horse. After a few breathless moments, his fingers closed around the shaft and he clung to the knife as “a drowning man grasps a floating plank”. Eager not to waste his only chance at survival, Wolhuter carefully estimated the position of the lion’s heart. He could not struggle, or the lion would have shaken him and broken his neck.

Finally, after a distance of about 90 yards, the lion reached a small tree and let go of its prey. Wolhuter grabbed the opportunity and plunged the knife into the lion, stabbing it twice in the torso and once in the neck. The lion leapt back and the two creatures, prey and predator, stood staring at each other for a breathless moment. Wolhuter let out a yell at the lion, which slowly turned around and limped into the bush. 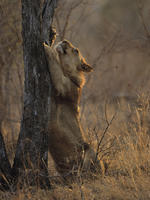 Without thinking, Wolhuter scrambled up the tree. He was bleeding heavily and, fearful of losing consciousness, he took out a ‘neckerchief’ and tied himself to the high branch on which he sat. No sooner had he done this, when the first lion re-appeared. It had given up the wild horse chase, discouraged by the barking of Wolhuter’s plucky pooch, and followed the blood spoor back to the tree which housed a very vulnerable Wolhuter.

The lion started circling the tree, as Wolhuter’s dog kept up a spirited defence of its master. From the bushes, he could hear the other lion groaning as it succumbed to its wounds. Time seemed to stand still. Then, finally, Wolhuter heard the sound of his men coming along the path. He began shouting to get their attention and the lion slid away into the dark bush. The men quickly helped Wolhuter down from the tree and supported him as he walked the eight long, dark miles to the camp at Metsimetsi.

The lion kept up with the party for some distance, and they could all hear it creeping through the tall grass as it kept pace with the group. Eventually, a bleeding and exhausted Wolhuter stumbled into camp. But there was little relief. Metsimetsi contained no medical supplies and little could be done to clean the festering wound on his shoulder. 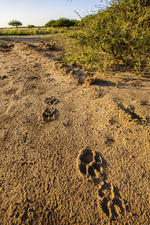 The next morning, Wolhuter was running a fever and he ordered his men to construct a rough stretcher from branches, which they used to carry him to Komatipoort. The journey took two days. When he arrived in town, the district surgeon was away, and a delirious Wolhuter was sent by train to Barberton. He finally arrived at a hospital nearly three days after the attack. His shoulder was lacerated and his arm was black and swollen from blood poisoning.

The doctors dressed his wounds but didn’t think that he would survive for much longer. But never underestimate a game ranger! The hardy Wolhuter pulled through and made a full recovery. He later returned to his post and continued to work in the park for the next 40 years. The only physical reminder of the encounter was a stiff shoulder (with matching upper lip). For his fortitude, he earned the nickname Lindanda – referring to his penchant for wearing a Swazi-style loincloth, called ‘lihiya’.

The site of Wolhuter’s attack can be found on the S35 gravel road, a short distance from the Tshokwane picnic site. The tree that he climbed is still there, although it is long dead with only a small remnant of the trunk propped up in a concrete plinth remaining. A memorial plaque has been erected on the site which describes the dramatic events of a century ago. The lion’s skin and Wolhuter’s trusty knife are on display in the Skukuza library.