©Glenneis Kriel
Piglets are allowed to move safely to and from the Sow in farrowing pens.

Farrowing crates for pig farming are one of the best investments a farmer can make. Sows are moved to these crates about a week before farrowing and kept there until her piglets are weaned at 21 to 28 days of age. The movement of the sows is restricted in the one area of the crate, while the piglets are able to move freely to and from the sows in and out of a creep area.

According to the Welfare Code of the South African Pork Producers Organisation (SAPPO), sows may not be moved to the crates more than seven days prior to their due date and may not be kept there for longer than six weeks after farrowing.

©Glenneis Kriel
In the absence of farrowing pens, Sows should have enough space to protect the piglets from other pigs.

Animal activists might argue that this is a cruel practice, but the truth is that farrowing crates for pig farming may help to improve animal welfare by ensuring optimal temperatures for the piglets and sow and by preventing sows from stepping or rolling over their young.

Besides this, it protects young piglets from diseases and parasites, since the farrowing pens are cleaned and sanitised before the sows are moved into them. In most systems the sows are also washed and dewormed before being moved to these crates.

In addition, the crates allow farmers to better assist sows during labour and better monitor the feed, water intake and health of both the sows and piglets. This is incredibly important, since up to 65% of all piglet mortalities occur during the first week after birth. 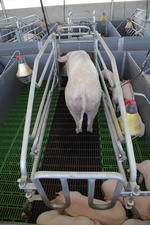 According to the website, Farming Truth, the good definitely “outweighs the bad” with farrowing crates not only being a common farming practice in South Africa, but also the United Kingdom, Europe and the United States.

The main disadvantage is the cost, since the crates are expensive to start off with and will add to cleaning and electricity costs. Improved animal welfare, fewer mortalities and better growth, however, makes up for this over the long run. Other disadvantages are that it may cause injuries and health problems, such as foot sores and even lameness, if not designed or cleaned properly.

According to the Welfare Code, the pens should allow for the natural movement and behaviour of the pigs. Sows, therefore, should be able to lie down and stand without any restrictions to their limbs. The back of a sow should not touch the top bars of the crate, nor should her sides be in contact simultaneously with both sides of the crates.

©Glenneis Kriel
Farrowing pens reduces the risk of Sows rolling over their young.

Farrowing crates do not have to be kept indoors. In America there are free-range farmers who successfully use collapsible crates on pastures during the warmer months of the year. They rotate the crates over the pastures to prevent a build up of diseases or parasites on specific spots.

In indoor systems this challenge is overcome by providing spot heating and warmer flooring in the heating area, while the sow area has cooler flooring. Various designs and structures are available, ask an animal health technician for advice on a structure that would be most suitable for your production needs.