©David Fleminger
The Mapungubwe National Park receives thousands of day visitors (including many school tour groups) and the numbers are rising all the time. Furthermore, 60% of the visitors are black, which stands in stark contrast to the overwhelmingly white attendance figures of the other national parks.
This discrepancy may be because Mapungubwe is the first national park to be dedicated to a uniquely African moment; one which celebrates a history that was once denied or dismissed. The other parks, on the other hand, are often seen as extensions of the apartheid system and were traditionally off-limits to the natives. The inclusivity of Mapungubwe is therefore something that SAN Parks is keen to encourage in its other conservation areas.
But it’s about more than just politics. Mapungubwe is proving to be popular because it is a fantastic place to visit. The scenery is unusual and distinctive. The rest camps are outstanding. And the park also contains the three important archaeological sites of Mapungubwe Hill, K2 and Schroda. 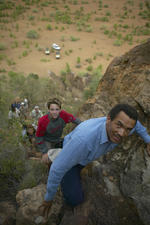 ©Roger de la Harpe
The park offers excellent accommodation (much better than Kruger) and a wealth of activities and attractions.
The scenery in the park is unusual and dramatic. Over the millennia, what was once a high plateau has been eaten away to create a landscape of alternating valleys and ridges.
At the edge of the Limpopo, the remains of this plateau give way to a steep escarpment that descends to the river’s flood plain. The altitude ranges from 300 to 780 meters above sea level.
The isolated hills and koppies of the region, such as Mapungubwe, were created when a layer of Clarens Sandstone became heavily eroded over the aeons, until only a number of free-standing outcrops were left.
This cap of red rock (described as ‘petrified desert dunes’) combines with the yellow grass in the valleys to give the visitor a vivid sense of colour.By David Fleminger
©2020 South Africa Online (Pty) Ltd. SouthAfrica.co.za. All Rights Reserved.