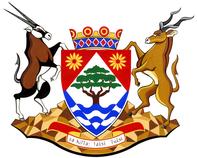 Sa ǁa ǃaĩsi 'uĩsi - “We go good life” is the Northern Cape’s motto, translated from the San language. This motto is written on the base of the Northern Cape Coat of Arms, which was granted on 25 August 1997.
The base is multicoloured in hues of brown and has a 3D effect, representing the arid and rocky plains of the Northern Cape. The shield rests on the base, with a diamond shape dominant in the shields field. The bottom of the diamond and shield is coloured blue and white in a wave pattern, depicting the coastline of the Northern Cape where many diamonds have been sourced. Also in the diamond shape, a thorn tree is depicted. The uppermost corners of the shield are coloured red with a yellow daisy on each side.
The diamond shape represents the mineral and economic wealth of the province. The yellow daisies represent the sun and ecological heritage, specifically the annual spring wildflower show that occurs after the winter rains in the region.
The crest is a coronet consisting of a circlet embellished with San beadwork.
The shield is supported by an oryx on the left and a kudu (male) on the right. 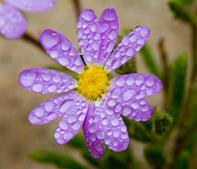 ©Shem Compion
Carpets of orange festoon the veld which, before the winter rains fell, looked like barren ground, drawing tourists from all over the world to witness this natural annual spectacle in the Northern Cape - the Namaqualand wildflower show.
The Namaqua daisy is an annual flower that grows prolifically in the wild after the winter rains in the Northern and Western Cape Provinces of South Africa. The flowers are daisy-like with large petals with an orange centre, although the centre may sometimes be yellow. Close to the bottom edge of the petals, there is a narrow greenish mauve ring. The flower blooms in a variety of vivid colours including bright orange, yellow, cream and salmon. They need full sun to open and track the sun as it moves east to west. Which is very useful to know if you plan on taking photos of the flowers. Don’t go flower spotting on overcast days or too early in the morning, as the flowers will still be closed.

©Nigel Dennis
The oryx, also known as gemsbok, is able to survive the harsh desert temperatures and lack of water by using thermoregulation in its brain to reduce the water needed and to keep the brain cool. The oryx has developed an adaptation known as the carotid rete, which is a network of capillaries at the base of the brain. Warmblood going to the brain via the carotid artery first passes through a series of capillaries in a sinus network, where it is cooled by heat transfer from the cooler venous blood that is leaving the brain. Another way of thermoregulation that oryx employ is to concentrate urine and absorb as much moisture as possible from its dung, producing very dry and hard pellets.
Gemsbok, are both grazers and browsers, feeding on leaves, grasses, fruit and herbs, all of their water needs are satisfied with their food intake. However, if water is available they will take a drink.
Oryx often congregate in herds comprising of females and non-territorial bulls as they move in search of food. Dominate bulls, guard and hold their territory in order to mate with passing female herds. Non-territory bulls, passing through another's territory, will be submissive to the dominant bull to avoid his aggression. Oryx are known to chase off lions and to even kill them by using their formidable horns.
©2020 South Africa Online (Pty) Ltd. SouthAfrica.co.za. All Rights Reserved.