An Address to Mandela 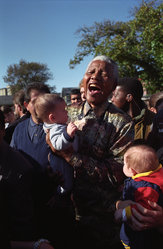 Kofi Annan took full advantage of the occasion of the Fifth Nelson Mandela Lecture on the 22nd July 2007, in honouring Nelson Mandela's name and his humanity by expressing his and his wife Nane's delight at spending 'your birthday here with you in Johannesburg' (on 18 July) and then humorously adding his personal approbation: “It is truly a privilege for me to deliver this year's Mandela Lecture. Before I begin, I want to clarify something. I am delivering a lecture in honour of Nelson Mandela.

I am in no way delivering a lecture to Nelson Mandela. I wouldn't dare. If I did, I imagine he would listen graciously, tolerantly. But let me tell you this: one does not presume to lecture Madiba. Not on his birthday, not on any other day. He may have relinquished his office years ago, but he has not relinquished one ounce of his natural, personal authority. Still, for some reason he Persists in calling me 'boss'.

For years, whenever I'd call, he would say, 'My boss. How are you, boss?' I'd reply, 'How can I be your boss?' He'd say, 'Secretary-General of the UN. You run the world'. Of course, as he knows, I never did run the world. Now I don't even run the UN. And still he persists. I think he is teasing me. But then, he has always been like that. You see it in his expansive smile. Nelson Mandela may be the most gentle, good-humoured, even mischievous icon that the world has known.

He is also one of the strongest. We all know about his courage and tenacity which saw him through 27 years in prison and saw South Africa through the end of apartheid and a difficult, but successful, transition to freedom. The world has seen how deeply he believes in freedom, human dignity, and the right of the individual to fulfil his or her dream. And in our work together, I have been privileged to see how determined he can be in pursuit of those ideals.

I have seen him in tough negotiations like those in Burundi, where he was trying to get the warring factions to put down their guns and make peace. When he saw what was going on around him, he said, 'You men make me ashamed to be African.’ A withering indictment from someone who makes us all proud to be African. You can imagine the force of these words. Or perhaps you cannot. It was an extraordinarily powerful moment.

And it certainly had its intended effect. On certain points — certain principles — Nelson Mandela cannot be moved. When his term as President ended, as you know, a lot of people tried to talk him into staying on. But he was determined to leave office. What a wonderful example on a continent where Presidents have, in some cases, defied or changed their countries' constitutions and clung to power for decades.

There are other former leaders who have drawn important lessons from Mandela's post-presidency: that the centre stage is not the only place from which you can make a contribution.