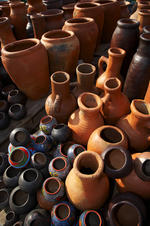 ©Roger de la Harpe
The traditional African way of life was generally eco-friendly and biodegradable. That’s why the earliest Bantu communities left behind few tangible remains for us to find today.
This can be very frustrating for archaeologists and historians who are trying to piece together our unwritten prehistory. But there is one thing that has proven very useful in identifying and dating the various African cultures – pottery.
While nomads, such as the San, had no use for heavy and fragile pots and jugs, the sedentary Bantu created large numbers of these vessels for storing water and grain.
Luckily, clay pottery tends to stick around, even when it’s broken or discarded on the village rubbish dump.
Furthermore, each culture tended to brand their pots with distinctive engraving, patterns and designs, such as triangles, chevrons and diagonal lines.

©Roger de la Harpe
Therefore, by analysing the different decorations and shapes of surviving potsherds, we have a means of categorising and sequencing the different tribes.
We can also use the pottery evidence to determine the geographical reach of each individual culture. So potsherds have proven to be an invaluable tool for archaeologists.
In fact, since we have no record of their original names, many of the early tribes are now solely identified by the shape and decoration of their pottery.
Rather strangely, the conventions of archaeology dictate that the name given to each distinct ‘pottery-culture’ is usually derived from the farm or location at which the style of pottery is first found.
This is called the Name Site. I have gone to some lengths to explain this system so that you will understand why many of these early Bantu communities have cheerful but rather twee monikers, such as the Happy Rest culture, who sound like they were running a vacation resort.

©Roger de la Harpe
The advance guard of the Bantu migration arrived in southern Africa around 200 AD. They brought with them new technologies, such as metal working, and this is considered to be the start of Early Iron Age in southern Africa.
One of the first identifiable Bantu communities to inhabit the Limpopo-Shashe basin is the oddly-named Happy Rest culture. This tribe, along with others such as the Gokomere culture, appear to have been living in the area between 350 and 450 AD. Very little is known about these early iron-age agro-pastoralists other than they practised a mixture of crop-growing, hunting and stock farming.
Then, between 600 and 900 AD, it appears that all the farmers abandoned the Shashe-Limpopo Basin. This may have been because the climate changed and the region was no longer suitable for agriculture. This ecologically precarious part of the country is constantly teetering between fertility and drought, and a shift in rainfall patterns could prove fatal for a civilisation. This alternating cycle of dry and wet periods would be a crucial driver in the settlement patterns of the region.

Although there wasn’t much going on in the Mapungubwe area during this period, several strange and little-known tribal cultures were developing in other parts of the country. One fascinating example is the mysterious people who made the bizarre Lydenburg Heads, found in Mpumalanga.
These terracotta masks depict the faces of weird half-human, half-animal creatures, and it is believed that they were used in sacred rituals and initiation rites. The Lydenburg Heads are on display in the South African Museum in Cape Town, with replicas at the local museum in Lydenburg.By David Fleminger
©2020 South Africa Online (Pty) Ltd. SouthAfrica.co.za. All Rights Reserved.