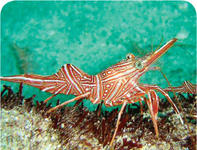 Elongated body with segments. Five pairs of legs. Thorax is solid with a bendable abdomen. Two pairs of antennae. They have pinchers on the first two pairs of legs. Colouration varies with red, white and orange dominant and pink, yellow, brown and blue also observed.

Alpheoidea superfamily consists of 22 genera and 129 species. This superfamily includes all shrimps. Distinguished from prawns by comparing the second abdominal segment, which overlaps both first and third segments in prawns. Some of this family acts as cleaners of fish on reefs. Pelagic spawners.