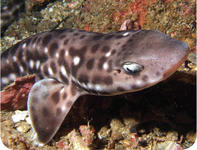 Catsharks can be up to 3 m in length.

Catsharks are characterised by their first dorsal fin which starts behind the pelvic fin. The second dorsal fin is larger and their eyes are oval shaped. They differ in colour and are marked by irregular patterns.

Catsharks belong to the Scyliorhinidae family which comprises of 15 genera and 105 species, making them the largest shark family. These creatures are predominantly nocturnal and can be found in shallow areas close to reefs, and as deep as 2000 m. They catch their prey by gulping it up. Some catshark species are ovoviviparous, but they mostly spawn their large eggs in hard egg-casings with tendrils.

They can be found in all oceans across the world.