First, there was the French paradox: the world of dietary science was transfixed by the apparent enigma of how a nation could indulge in a diet high in artery-clogging animal fats, and yet stay trim and have a relatively low incidence of heart disease.

©Eric Miller
A woman at her home in the impoverished community of Khayelitsha.

Then author and Berkeley journalism professor Michael Pollan coined the ‘American paradox’ in his book In Defense of Food: how the pursuit of the healthiest diet – culminating in the modern Western obsession with eating high-carbohydrate, low-fat foods (most of which are processed to within an inch of their lives) – is killing Americans and any other culture that chooses to adopt it.

But here is the poverty paradox: if you are born an underweight baby, you are at greater risk of becoming a fat or obese teenager and grown-up, getting adult onset diabetes and suffering from heart disease, than if you were a healthy or normal weight baby.

Underweight babies tend to be born with more fat than lean muscle mass. Later in life, when they are exposed to more calories, they pack on fat rather than muscle, leading to the chronic lifestyle-related diseases that we tend to judge people for having because we assume they are just weak-willed, greedy or lazy.

Speaking in an interview with Health-e news reporter Kerry Cullinan, Dr Benjamin Caballero from the Center for Human Nutrition at the Johns Hopkins Bloomberg School of Public Health in the United States warned that once low-birthweight children end up in homes with ‘energy-dense’, processed, low-nutrient food, in a low-exercise environment, ‘they are predisposed to excess weight gain and body fat accumulation’.

The trend in developing countries, including in South Africa, is for undernourished infants to bloat into obese adults, Cullinan writes, where the ‘high prevalence of low birth weight is now combined with an urban, sedentary lifestyle and increased access to low-cost, energy-dense foods’.

So in South Africa, while nearly a third of all children are undernourished, according to the World Bank, over half of all adults (55% of those aged 15 or older) are either overweight or obese, and urban children are twice as likely to be overweight than their rural counterparts.

The starving Somali refugee is often put alongside a bloated urbanite to show up the massive disparities in the world – the haves and the have-nots, the rich and the poor, the hungry and the obese.

But what Caballero is saying is that much of the obesity we see around us in poorer developing communities is part of the same continuum of poverty and food insecurity as the infant that breathes its first but is below the magical 2 500 g cut-off for healthy birth-weight.

The combination of being born undernourished and the increased risk of gaining weight later in life, along with the changes in the places and spaces our people live in, is creating a perfect storm for a rampant obesity epidemic.

‘Rapid urbanization and the adoption of Western diets high in refined carbohydrates, saturated fats and sugars, combined with a more sedentary lifestyle are commonly cited as the major contributors to the increase in overweight and chronic diseases,’ states the World Bank.

There are also significant cultural dynamics at play where ideas and beliefs about weight influence people’s relationships with their bodies.

This is why Professor Milla McLachlan at the University of Stellenbosch’s Division of Human Nutrition argues that the very fact we find undernutrition and overnutrition, malnourishment and obesity, in the same households and communities suggests it is time to rethink the problems in the food system. ‘Often, overweight people can have poor micronutrient status,’ she says.

‘The bottom line is that both under- and overnutrition are outcomes of the linkages between the food system and health, as both input and outcome of interaction with the food system.’ The Cape Flats a family may have moved into years ago is quite different to the Cape Flats of today.

The place was thickly vegetated, with very few buildings or shanties. In fact, it was only in the 1960s, after the apartheid government’s forced removal of Cape Town’s coloureds, that the so-called first wave of migration started to the Flats.

There was a ‘second wave’ of migration to and settling down on the Cape Flats in the 1980s, writes Professor Mickey Chopra from the University of the Western Cape, ‘when a then illegal process of African migration started en masse from extremely impoverished areas of the Eastern Cape’.

The combination of ‘apartheid spatial planning and strong migratory push factors contribute to the continual urban sprawl of Greater Cape Town and the expansion of its highly racialized economic geographies’ of the area of Khayelitsha and Greater Nyanga, where the population today is about 750 000, explains Chopra.

Diet of the Newly Urbanised 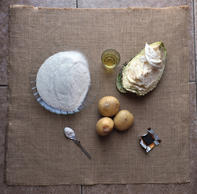 ©Eric Miller
When people move to urban areas, simple meals like this will fall away to incorporate more meat, dairy and oils.

But a move into the city changes the way we relate to food, the upshot of which has very serious implications for our health and well-being. In fact, it has become so marked in recent years that tomes are being written about the nutritional transition of newly urbanised communities around the globe, particularly the developing world.

One of the first main dietary changes we see for someone moving in from the country is a shift away from cereals. According to the 2000 National Food Consumption Survey, rural South Africans tend to eat a lot more maize porridge than their urban counterparts, something which you would probably find is similar in neighbouring countries, and portion sizes, when they do eat maize, are a great deal larger.

They also eat wild leaves. Some of the research suggests that urbanising people leave behind a more diverse, plant-based diet (this is corroborated by some United Nations FAO findings, for instance). But other observations indicate that for the really poor rural dwellers, they do not have much dietary diversity. And yet this is a symptom of poverty rather than a reflection of the true nature of the ‘traditional diet’, hard as this might be to define.

So, for these people, a move to the city does not necessarily mean a switch to an abundant, diverse diet – food poverty in the city could well be as bad as food poverty in the country – but a dramatic dietary shift happens nevertheless. So what do people start eating when they set up camp in the suburbs, townships and slums of these burgeoning cities?

Even though grains remain the staple, meat and dairy consumption increase, and people start eating more oils, salt and sugar. Dietary fibre begins to fall away. This is what the FAO calls ‘dietary convergence’.

Urbanites drink more coffee and fizzy drinks, and eat much more sugar, meat, offal and potatoes than those in the country. And, according to the National Food Consumption Survey, urban children take in a lot more calories than rural ones.