© Eureka Mills
Stone ground flour is made when the miller grinds grain between two stones.

Stone ground flour is nothing new, but dates back to ancient Egyptian times when grains were crushed with a stone mortar or with a saddle stone, where the grain was crushed in a stone bowl by rolling a cylindrical stone over it.

From this developed the quern, a process whereby two circular stones were placed on top of one another, with the top stone having a handle to turn the stone and in effect grind grain.

This gave way to mills that used much larger stones, initially powered by animals or slaves, and then later during the Roman times by water. Windmills were also used to power millstones in Europe by the twelfth century.

The first fully automated mill, called a grist mill, was built by Oliver Evans in 1784 near Newport in the United States. His mills were water powered, so were situated all along rivers in the wheat producing regions of America.

Roller milled flour was basically developed because some wheat varieties were too hard for stone grinding. Its history started with Jacob Sulzberger, who constructed a mill that used three rolls, one on top of the other, in Frauenfeld, Switzerland, in the 1830s.

Over the years, different people made various improvements to the design, ranging from extra processes, the addition of more rollers as well as sieves, and the use of different material for the rollers, from cast-iron to porcelain. 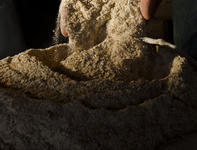 ©Eureka Mills
The flour can be made from any grain variety, although some varieties are more suited for specific types of baking.
Stone ground flour can be made from any grain, such as wheat, rye or spelt, or a mixture of these. Factors such as area of production, grain variety and type of production may influence the taste of the flour, but this is usually only picked up by connoisseurs.

©Eureka Mills
Eureka Mills is one of the stone ground suppliers in the country.
Local sales have been growing steadily, albeit from a small base, over the past few years due to the rising demand for healthy foods containing dietary fibres. Most of the stone ground flour producers aim to produce their flour as naturally as possible, so the flour generally also does not contain the additives and chemicals added to mass-produced flour. 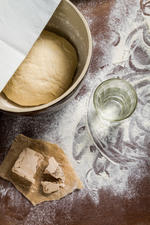 Stone ground flour can be used like ordinary roller milled flour for baking and cooking anything from bread to cakes, pastries and pasta.

For bulk or Stone Ground Flour export enquiries please use the enquiry link below.