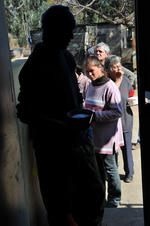 ©Eric Miller
The residents of Sonskynhoekie line up to receive their first meal of the day.

Keeping this generation of city dwellers fed and properly nourished is about making sure we can all tap into the abundant but sometimes inaccessible supply of food that makes its way to our urban markets. How we are able to access the city’s food flows depends on whether or not we have money to buy food.

When we do not, we adopt many different strategies to make sure we get it. Sometimes we may beg, borrow or even steal. Whichever way, social networks and crafty livelihood strategies are key to our survival when we are living off the fiscal grid.

The cockerels of Sonskynhoekie are overly punctilious, their rise-’n-shine-ing still filled with self-importance, even though it has been several hours since they roused the sun from its slumber.

No one is paying them the slightest heed. The breakfast bell here commands more authority, sounding out at mid-morning to call the residents of this dusty smallholding north of Pretoria into ragtag order at the door of the communal kitchen.

A dozen or so people line up with porridge bowls, old ice cream tubs and Tupperware containers, each waiting for the two or three ladles of porridge that will be served up for them by the woman whose name popped up on the roster to make today’s meals.

As fast as they are served, they trail quietly back to their ‘Wendys’ – little wooden or corrugated-iron Wendy houses – after one of the two meals they will get that day, courtesy of the establishment. Camp matriarch Cornelia Terblanche watches over the queue from where she is planted on the abandoned brick braai on a weathered concrete slab outside a square block, which houses the camp’s kitchen and ablutions.

Today’s breakfast is Maltabella porridge. But some days it will be oats; other days an ‘energy pap’, the kind given out by local clinics; sometimes it will be bread – all food donated by local retailers or farmers to the Sonskynhoekie Sorgsentrum, a care centre for down-and-outs.

At around 1 p.m., Cornelia will go into the centre’s stores and decide what the camp’s dinner will be tonight: medieval-looking beef bones which Jackie van Tonder (43), today’s cook, will boil up in two slightly buckled aluminium pots, adding only potatoes and onions, to be served with rice when the camp bell rattles out its toll at around five this evening. For now, the former car guard folds her stout arms into a clinch across a mountainous bosom, and presides over the serving up of breakfast.

After nine years here, she has worked herself up in the informal hierarchy of the centre, one of many such formal and informal settlements that have popped up in and around Pretoria in response to the cuts in state jobs in the railways and steelworks, which formerly gave sheltered employment to blue-collar white workers under the National Party.

Start of the Shelter

Sonskynhoekie was started by Hans Duvenhage, a blue-eyed 59-year-old (‘nog bloedjonk’ [still very young]) with a Paul Kruger beard radiating out from beneath a clean upper lip. A head of dyed black hair, peeking out from under his Andy Cap hat, is out of step with the chalk-white chin hair.

The erstwhile scrap metal dealer is missing a few digits on his right hand, and dangles a 70s-style cigarette holder in his left hand. Perched lazily in the sun on a side stoep (verandah), the ageing Afrikaner speaks through denuded gums, explaining how he and his late wife had the notion to start a shelter of sorts on this smallholding, where he has lived for 25 years.

The Duvenhages were warned against it by his dominee (church minister). ‘These sorts of people wear you out,’ he was told. But Oom (Uncle) Hans went ahead anyhow, registering the place as a care centre. One night, he stopped to ask three boemelaars (tramps) walking along the road where they were heading. They were homeless. The bit of meat they had on them was ‘grass green and full of worms’. He brought them to the smallholding and gave them food and a caravan to sleep in. Word spread through the bush telegraph to the indigent white community of Pretoria, and almost overnight the shelter was packed to the gills.

Today there are about 50 people living here. Between the bush telegraph and Pretoria’s network of shelters, people get shuffled from one available bed to the next. When someone leaves here, their Wendy house is given to the next person who arrives. These days, R400 a month buys you a roof over your head, and two blank-canvas meals a day – pap or bread for breakfast and a pretty spartan dinner with starch, a bit of meat and maybe some vegetables.

Anything else – butter, milk, sugar, jam, flavourings – you have to buy yourself. Now, the tents and Wendys and caravans dot about the bare earth between the Duvenhages’ bricks-and-mortar homes where Oom Hans, his children, their spouses and grandchildren live.

©Eric Miller
A Sonskynhoekie resident hangs their washing on the communal outside line.

A plakkerskamp (squatter camp) like this, for poor, jobless whites, has become something of a social spectacle. Black poverty is ‘normal’, but whites living in slums is anomalous. And the people of Sonskynhoekie know it. They do not want outsiders poking about in their lives.

They do not want cameras pointed at them; they do not want their photographs in the newspapers; they do not want their families to recognise them and see where they live. The mood, in the presence of outsiders, is politely chilly and evasive at first. These are not people born into poverty, like so many black South Africans, who might have a chance to claw their way out if they can get a decent education and a paying job.

The people of Sonskynhoekie all come from somewhere, and have washed up on the tide of ill fortune: a lost job; a crumbled marriage; an unhappy run-in with alcoholism; some discharged from Weskoppies, the state psychiatric hospital in Pretoria, declared stable enough to fend for themselves as long as they stay on their chronic medication and collect their disability grants each month. ‘We all come out of houses.

Ons het almal ons eie plekke gehad.(We all had our own places.) We weren’t used to something like this,’ Cornelia says, as the residents of the settlement file slowly past her, heading step by step towards the cauldron of Maltabella. She remembers her first impression of the place, which was little more than a few ramshackle Wendys in a yard filled with scrap metal and cars melting under the Highveld sky, oxidisation flecking them with pockmarked orange.

‘How can white people live like this?’ she remembers thinking. But while white poverty may seem incongruous in the wake of a political and class structure that favoured whites for decades at every level – education, jobs, the vote, a chance in life – the day-to-day survival strategies of people like the residents of Sonskynhoekie are universal.