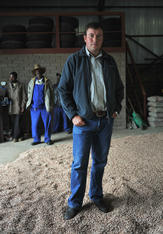 The sleek 4x4’s rump sways out to one side, then over to the other as the wheels scramble about, trying to find purchase on the porridgy road as Jan Scheepers heads off to inspect a few more fields following the previous day’s downpour. At 34, he has achieved what most farmers aim for in a lifetime.

Between himself and his wife, Amelia, they have built up a small empire through calculated risk-taking on the back of rising land prices. Just like his father, Michael, Jan started ‘farming’ when he was just a laaitie (young person). Michael got his first three or four dairy cows when he was a small boy, too, and Jan was out in the fields as soon as he was big enough to get around.

When he was not out in the fields, he was growing something in the back garden. ‘I had a huge garden. They always laughed at me, but I was kind of farming in my own in the backyard! I had planted mealies and everything, and my mother used all the beans and stuff just for the house. Like my father was farming with cows since he was small, I was farming since I was small as well.’

A quick stint at the technikon in Bloemfontein got him some training in management. Then Jan came back to the countryside where he had grown up, and joined his father’s farming operation, taking over the crops, while Michael focused on building up the dairy and beef. ‘We started doing it better, going at full revs.’ Then in 2001 they split the business.

Old man Scheepers carried on with the dairy and beef; young Scheepers took the crops off into a separate operation with its own bank accounts and eventually bought out his father’s shares in the crop side of the business. But in 2005, he saw the operation was too small.

After referring to himself in the first person, he switches over to the second person for a while, as he carries on with his story. Maybe it is to distance himself a bit from the narration. ‘The overheads were getting too big. You were always in debt.

There wasn’t money. You put in a lot of money and you get out a lot of money, but after you’ve paid all your expenses, there wasn’t any money left for yourself. You just made a living, but you didn’t go forward, and I realised that you have to go bigger.’

And go bigger he most certainly did. The first thing was to stop renting cropland, and buy. Rental agreements here are mostly limited to three-year leases – that is just enough time to stock up someone else’s depleted farmlands, enrich them with fertilisers and get them productive.

When the lease comes up for renewal, there is no guarantee of a second term of tenure. There is just no security at the end of such a long, intense investment. ‘In Africa, the condition of the soil is poor. It’s arm (poor),’ he says, switching over to his home tongue of Afrikaans for a moment, then back into English again. ‘What do you call it? It’s depleted of nutrients.

You have to pick up that land, it’s like a pot with soil, but sterile soil, nothing in it. You have to put in nutrients. You have to put in lime. You have to do your contours, your planning and everything, and once that is right the land can start producing. ‘You’ll plough a lot of cash into that soil to get the chemistry right. Once you do, though, you can expect your yields to go up by as much as 50%.

Then there’s the run-off from all the rainfall, and the erosion that goes with it. Fix that with contouring and building waterways, and you’ll get another 25% return on your yield. ‘And then you’ve got the farm in optimum condition; it takes you about three years to achieve that, and a lot of money.

The farm is looking beautiful! It’s in top production. Then everybody wants it! Then it’s up for rent again and the rent goes up. Or if you have to buy it, you have to buy it at a big price. You kind of pay for it twice.’

©Eric Miller
Scheepers' farm after a summer of heavy rain.

That is pretty much what happened with his first farm. He picked it up as a rental property in 1999. ‘The place wasn’t worth much, it was only good for grazing. I saw the potential, and I fixed it over the time that I leased it. I made a lot of lands. And once I had to buy the place, everybody else wanted it because it was looking good now and was producing. It was in top production.’ He bought it in 2005.

His first property, all 600 hectares of it. It was risky business, though. He had to come up with a lot of cash. But one farm was not going to crack it. Things were going well with the business, but it was not good enough. ‘The way forward is to go bigger. Because each year, as inflation goes up, the living cost goes up. You had to have more hectares to maintain a family.

Or to get the same income, each year you have to have more hectares. I think you have to grow at least 3% per year, either in yield or in area.’ If you have done everything you can to squeeze maximum yields out of the soils on your existing property – which Jan had – the only other thing is to buy up more farmland.

It was 2007 and there was a bad case of Mugabe-fever doing the rounds – people were talking about land grabs here in South Africa. Between that and bad drought, sentiment regarding the future of agriculture dipped. Land prices followed quickly behind. ‘I don’t know why, but farmers tend to talk themselves up that things are really bad now, and then it gets from bad to worse.

And the next day they turn around and they say things are good, and then it’s wonderful. ‘So ja, sentiment was bad; Zimbabwe was in the air and nobody wanted to buy.’ That is when he found a 1 840 hectare farm up near Kransfontein and got a fabulous deal. It was not without risk, though – he had to put his first property up as security, as well as one other farm he had bought along the way. But the banks are ‘jockey-oriented’ he says – they back the farmer, not the farm.

And he was already showing himself to be a good jockey. He bought that farm early in 2007, even though it was so neglected, and put a lot of work into it. He ‘fixed it’ and, sooner than expected, he started getting really good yields. And just like that, the farm paid for itself.

And then he had his really big break. People up in Jo’burg started looking to become ‘gentlemen farmers’, buying up land in the red hills of the eastern Free State so they could have a little holiday pad just a few hours’ drive from the city. And farmers from KwaZulu-Natal and Mpumalanga, who had been bought out by the land claims process in their provinces, were looking for a new place to set up shop.

And then, a bumper crop. ‘After a year we had a good crop. And land prices doubled suddenly because nothing had changed in Zimbabwe, the country wasn’t in the news any more. Land prices doubled, and after two years, prices doubled again.’ With such a good harvest, the farm would have paid for itself in the first year. But, instead, he put the money into buying another farm.

Keeping an Eye on Business

Then, in 2009, another big opportunity came near Bethlehem. ‘A really, really good farm came onto the market, and I bought that one as well. So in five years, I rode the wave of the land prices going up. I rode the wave and I was able to double the size of my farmland from 2005 to 2010.’ His increase has been much more than 3% per year. ‘Ja, so I have reached what a lot of guys wanted to reach in a lifetime.

I tend to...what do you call it...to turn the business more conservative now,’ he says, his inflected English sticking a bit as he translates in his head before speaking. ‘I’m young and still growing. I think if you are older, your appetite for risk is lower. You pay off your farm before you go and expand.

I was still young and I still had guts to take chances, instead of paying the first farm off.’ Keeping an eye on debt ratios and cash flows, he has used one property to finance another, and so he has grown. He plans to have most of his properties paid off within the next three or so years. And then it will be time to slow down, consolidate, keep what he has got performing optimally.

What else do you do when you are at the top of your game and only in your mid-30s? Jan Scheepers is in the business of growing food and is one of about 40 000 large commercial farmers in the country who produce much of the stuff that keeps the South African pantry stocked up.