Obesity in the Developed World 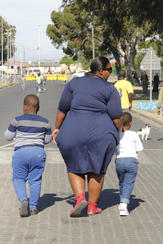 The subtext around obesity, until now, was this: if we are getting fatter, it is because we are somehow lazier, greedier, richer, weak-willed and impulse-driven. And if we got ourselves this heavy, we can jolly well show some strength of character and get ourselves thin again. And yet, if so much of the world is getting heavier, surely there must be more to it than that we just cannot resist those cheese puffs and the gravitational tug of the couch?

According to some of the key thinkers in this field, there is more going on. So, why are we getting fat? It started in richer, developed world countries in the 1970s and 1980s with radical changes in the global food system; other, less-affluent countries began following soon after as industrialised food systems moved into these emerging economies.

By 2008, according to the prestigious medical journal The Lancet in its special report on obesity in 2011, there were an estimated 1.46 billion overweight adults around the world (where the body mass index or BMI, a proxy for calculating body fat based on height and weight, is more than 25 kg per square metre) and 502 million obese adults (where the BMI is above 30 kg per square metre).

The Cost of Obesity

By the end of this decade, two thirds of the ‘burden of disease’ – those years of life lost due to early death, and years lost because of ‘time lived in states of less than full health’, according to the World Health Organisation (WHO) – will be linked to chronic non-communicable diseases such as diabetes and heart disease, rather than infectious diseases such as malaria, HIV or TB.

Most of these illnesses will be ‘strongly associated with diet’, according to the WHO. The costs are measured not just in premature deaths, though, but also in terms of the cost to the state of a population where adult-onset diabetes, heart disease, certain cancers linked with obesity and other potentially avoidable lifestyle-related illnesses drain the overstretched healthcare system of scarce resources.

Similarly, obesity costs cannot be measured only in losses to the economy or the drain on the health-care system. It is also measured in the day-to-day quality of life of people living in these larger frames, or trudging through the difficulties associated with these illnesses.

Obesity has implications for our mental well-being, too. Writing in the magazine New Scientist, Steve Bloom gets to the nub of things: ‘Socially, too, obesity is a disaster. People who are overweight are depressed, they have a lower than average income, a higher divorce rate and commit suicide more often.

Obesity is probably the single most important reason why, in spite of all the advances in medicine and sanitation, we are not living much longer than people a hundred years ago.’ Then there is also the cost to a family’s income, over time, due to loss of earnings as ill health keeps a breadwinner from work, and the burden of additional ‘carer duties’.

Burden on the Healthcare System

Looking at our northern neighbours as an example of the burden of this epidemic, the cost of treating these preventable obesity-related diseases is going to keep rising in the UK, as obesity levels themselves increase, going up by a projected £1.9 to £2 billion per year within the next two decades.

In the United States, the cost of treatment will rise by US$48 to US$66 billion per year by 2030. These kinds of projections are not available for southern Africa, but given how we are keeping in close step behind the West on these matters, we are going to continue burdening our already overloaded healthcare systems with the cost of treating these diseases.

Just as it makes sense to invest heavily in preventing malnutrition now, to save the state the burden later down the line, the same goes for the benefits of putting money into preventing the region’s Body Mass Index (BMI) from rising.