In many of the Northern Cape communities where research was conducted, mothers weighed 40–45 kilograms throughout pregnancy. Someone weighing this little is going to be missing many of the critical elements needed for healthy foetal development.

©Eric Miller
A billboard in De Aar warning of the dangers of drinking alcohol during pregnancy.

If a woman is small to start with, it is normal that she will have a physically small baby – a basic evolutionary adaptation to allow for her small pelvis to accommodate the baby through the birthing process. But if she eats poorly during pregnancy – which many of the women at risk in the Northern Cape do – the transfer of nutrients will not be optimal.

Even though the foetus is designed to be the perfect parasite – in that it will draw nutrients up through the placenta so that it will nourish itself beyond what can be explained from the mother’s physical attributes – there is still a limit to how much it can look after itself within the maternal-foetal unit.

There are certain metallic elements – what Professor Denis Viljoen calls ‘magic bullet’ elements such as zinc or copper – which will be missing or low in the diet of someone this malnourished. When these elements are low, the toxic effects from alcohol are more likely to show themselves in the newborn.

‘Animal experimentation has shown that if you have a magnesium or selenium or zinc or copper deficiency in an animal, and you give it x amount of alcohol and you give the same amount of alcohol to another control animal that’s properly nourished, you’ll have a difference in their progeny in terms of the toxic effects of alcohol.

‘If the magic bullet numbers are down and you’ve got protein down, then you’ve got a small child coming out at the end of the story.’ If a mother is drinking heavily on top of this physical basis, this level of undernourishment – and 60–70% of women in the populations he studied did drink heavily – the toxicity of that alcohol is considerably higher than for a normal infant.

One study that Viljoen was involved with compared drinking rates and the physical attributes of the mothers in three different high-risk communities: one group of women in the Northern Cape who had given birth to children with full Foetal Alcohol Syndrome (FAS); one group of high-risk Native American women attending a prenatal clinic in the United States (US); and another group of vulnerable Native American women in the US whose children had been referred for specialist treatment for suspected FAS disorders.

‘The major difference between the two populations of women is their body mass, which is very much higher amongst the [North American] women compared with the South African population. Here we’re talking weight, body mass.’ 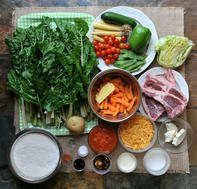 ©Eric Miller
Pregnant mothers who do not eat a balanced diet and drink alcohol are more likely to have children with FAS (Fetal alcohol syndrome).

There is also a genetic component, though. Someone may have more than two drinks in a sitting – two is regarded as ‘heavy drinking’ during pregnancy – and yet it may not necessarily produce an FAS child, even in a lightly built person, because they may have inherited a set of genes that allows for the rapid metabolising of alcohol.

This means a person would naturally have a series of enzymes in their system that destroys the alcohol faster and leaves the person with lower blood-alcohol levels. ‘So if you have a high kinetic enzyme activity that you inherited from your parents, you can metabolise alcohol more rapidly.

So even if you are a relatively slim person, you can drink more heavily than a person who is bigger than you but might have a slow metabolising set of enzymes.’ But if a woman is undernourished when she becomes pregnant, and if her weight does not climb much above 40 kilograms during pregnancy, she is going to have a depletion of all nutritional sectors.

‘That’s thin! Experiments on animals support the idea that certain elements will be lacking in the diet of a woman who is that thin and drinking, and who goes on to produce a foetal alcohol syndrome baby. If you’re drinking and you’re malnourished, you’re a dead cert for an FAS child. And if you’re smoking, it’s even more so because it’s been shown that the two are synergistic in their toxic effects.’

The tragedy is that these women are likely to have been born into the same intractable circumstance as the children they are producing. Women in a high-risk community in the Western Cape, who were producing FAS children, were found, in another study, to have precisely the signs of poor childhood nutrition and exposure to alcohol when they were in utero.

These women were ‘smaller in height, weight, head circumference, and body mass index, all anthropomorphic measures that indicate poor nutrition and second generation fetal alcohol exposure’. Viljoen’s experience in the field is that the women his group studied were poorly educated, often single mothers, existing in a general social malaise.

And the endemic poverty he encountered is captured in the 2005 National Food Consumption Survey, where women in the Northern Cape were found to be less educated than their sisters in Gauteng, North West and Limpopo, where only 35% had a primary school education, compared with 50% in those other provinces.

The Northern Cape also has the highest number of underweight women (16.7%), and the province’s children are particularly at risk of undernutrition, according to the National Food Consumption Survey.