Hilton College in the 20th Century 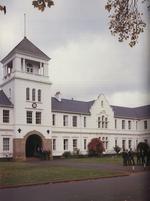 The South African War, which marked the end of the 19th century, disrupted life at the school as boys were called up to fight on either side.

As more and more boys and masters left to join the fighting, Ellis had no choice but to close the school, although it was not long before the tide had turned and the boys began trickling back. A brass tablet in the dining hall records the names of the five Hiltonians who fell in the South African War.

Headmaster Ellis retired in 1905. His departure marked the end of private ownership of Hilton: the Old Boys of the Hiltonian Society formed themselves into a company, Hilton College Limited, secured a mortgage bond on the property, which they bought from Ellis, and paid for the erection of a new building.

Reverend GE Weeks was appointed by the directors of the company as the new headmaster, but he was not a success in the role and resigned within a few months.

The year 1906 was a critical time for Hilton College. Archibald Pearce's sudden death had followed closely on the resignation of Weeks, and an atmosphere of unrest pervaded the school. Into this breach stepped the remarkable William Falcon, a rugby Blue twice over and a scholar of distinction.

Falcon proved himself more than equal to the job, bringing to his task imagination and energy. Soon 'Jericho' had been converted into a chemical laboratory (although it later reverted to use as a classroom), school furniture had been modernised and new desks purchased. The original 'Lords-and-Commons' schoolhouse was altered into a well-planned sanatorium.

Falcon also put his mind to improving the standard of education at the college which, although it did not compare unfavourably with others in the colony, was not high. He organised the boys into forms according to age and academic ability, and allowed them a wider choice of subjects to ensure that boys did not end up expending their energies on 'subjects for which they were temperamentally unsuited'. He continually endeavoured to introduce new and interesting subjects to the boys, to widen their experience and give them a greater interest in the world outside of the school walls.

Cricket similarly stood at a high, with the first Hiltonian to play cricket for South Africa, CD Robinson, coming out of this era. Rugby enjoyed a renaissance after a break of about 20 years (since the closing down of Bishop's College), when Michaelhouse proved able opponents - and that school has remained Hilton's main rival to this day. Just before the outbreak of the First World War enrolment had reached a healthy 150.

Although coinciding with the privations of the Second World War was a severe drought in Natal, the school ploughed on: some of the ground near the cricket pavilion - by this time somewhat dilapidated - was levelled and a football field laid out. The establishment of two cricket fields followed in 1917, and a third was added two years later.

After the war there was a rush of new applicants to Hilton College, and soon the numbers had risen to a new high of 270; a dormitory for the youngest boys was built on to the headmaster's house in 1918.

Then, just as Hilton was once again on a roll, disaster struck in the form of a typhoid epidemic that raged through the school, closing it for a term and taking the lives of four boys. To prevent a recurrence of the disease, a modern fly-proof system of sanitation was installed and both the dining hall and the kitchen enlarged and modernised.

Having been through this baptism of fire, Hilton was to experience a period of success like never before. The year 1922 marked the jubilee of the college, with Old Boys coming from far and wide to revisit their alma mater and their old haunts in the extensive grounds. Still today, Old Hiltonians show their loyalty to their old school - and their school takes pride in the fine men it has produced. The year 1926 was a bright one for Hilton College: electric light was installed for the first time.

The Hiltonian Society converted into a non-profit-sharing association by virtue of the Companies Act of 1926, and in 1930 the new Hiltonian Society came into existence, holding in trust a large majority of the shares in the original company. The new owners lost no time in bringing forward schemes of which involved rebuilding on a large scale.

A new dining hall was constructed and a gymnasium with a covered-in playground was erected; the main boarding house was completed and the exterior aspect of the buildings skilfully changed by Wallace Paton from College Gothic in style to Cape Dutch, and private studies were provided for the senior boys.

However, the shadow of the economic depression that affected the whole in the 1930s fell over the school, and the income from board and tuition showed a marked decline, resulting in the suspension of all building work.

The years of the Second World War were trying ones for Hilton. Large numbers of boys and masters left to join the armed forces, and tragically long lists brought sad news to many Hiltonian homes. More than 800 Old Hiltonians served in the war, and 80 did not return, including three head boys.

John Anderson Pateman, a Cambridge man, arrived to fill the post of sixth headmaster of the college. Under Pateman clubs and societies sprang up and flourished, among them a debating society, a music society, a highland-dancing club and a scientific society. A school newspaper, Library News, was published three times a year.

John William Hudson was the first headmaster of Hilton who had his roots firmly in South Africa. An Old Boy of Durban High School, he accepted the post as head of a crisis-torn Hilton College and left it four short years later, back on a safe, clear course. Edward Lancelot Harison, a graduate of Rhodes and Cambridge, took over the post from Hudson in 1957 and ran Hilton College for 10 years. Raymond Slater, who had been the second master since 1962, became Hilton's ninth headmaster in 1967. He oversaw continued upgrading of the school buildings, including the installation of a language-teaching laboratory in the basement of the Memorial Hall and the improvement of existing classrooms. Richard Herbert Todd became the next headmaster in 1981. Throughout the 1990s, Hilton embraced the challenges of a new education system in a new South Africa.