Passing on the Baton 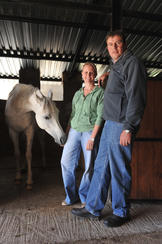 Keeping commercial farmers in the business of growing food is key to a nation’s ability to feed itself. And in a world where inheritance is often crucial to keeping land productive – the farmer’s son takes over the operation – safeguarding the next generation of potential farmers behind the wheel of the tractor is a large part of it.

But this may be changing. An example is the Scheepers family who have been farming for at least the past three generations. Granddad Scheepers moved up to the eastern Free State from a farm in the Montague area in the Western Cape. He did well, in spite of the lands not having good soil, because he stocked up with merino sheep. Then he helped his son, Michael, buy a piece of land at a time when the family was starting to move out of the mountains and down into the richer valleys.

Michael took to dairy farming and some crops, and tried to pass the milking baton on to his son. ‘My father tried to make a dairy farmer out of me, but I never liked it,’ Jan Scheepers smiles. ‘I went to the dairy every now and then, but every time I got a small chance, I was away at the tractors and into the fields. And I didn’t like the dairy cows.

I don’t know why, but that’s just how it is.’ Now his own son seems to be bitten by the same bug. ‘This little boy of mine,’ he says of his lad, Ean, ‘yesterday again when we got to the fields, he just jumped onto the tractor with the driver. After a while the driver called me on the radio and said can’t I please come and collect him because he’s sleeping on his arm and he’s tired now! Ean just loves it, and I was the same: if you could catch me, I was on a tractor in the lands.’

When you eavesdrop on the state of the commercial farmer these days – with the insecurity they face in the tremulous global market; with farm murders; the prospect of climate change; the uncertainty of their farms and inheritances being claimed under state land redistribution processes; murmurs of nationalisation of the land – it is hardly surprising that many youngsters are choosing not to stay in the family business.

Rather than take over the tractor wheel from their fathers, many farmers’ sons are going to university, studying to pursue other professions that might not involve getting mud on their shoes. They are moving off into the glamorous life of the city, free of grime and cow manure and the sickly sweet odour of silage.

This is one of the reasons why Agri SA started the Young Farmer of the Year competition. Part of the motivation, according to Scheepers, is to try to inject a bit more sex appeal into a livelihood that young people are running from, to the detriment of a nation’s food production.

Passion Needed to Make a Living

The abandonment of the family farm is not just happening at the commercial level. Even for subsistence farmers, the prospects of making a living off the land look rather bleak, causing many young people to flee their lands and head to the city. Writing in the Harvard International Review, economics professor Paul Collier says ‘peasant agriculture offers only a narrow range of economic activities with little scope for sustaining decent livelihoods. In other societies people have escaped poverty by moving out of agriculture.

Young people are fleeing the land; educated people want to work in the cities. Above all, people want jobs. .. The reality of peasant life is one of drudgery, precarious insecurity, and frustration of talent. ..’ Just like the tide of peasant farmers heading towards the city in search of a better, different, more modern life, the sons of commercial farmers are doing the same. Scheepers thinks you have got to be pretty much in love with the job, otherwise you would struggle to keep your eyes on the longer-term vision.

It is a tough business. It is hard work and you have to have the stomach for the risks involved. ‘It’s not as if I put in a crop and know I’ll have so much money at the end of the year. Some years we work for nothing; some years we work for a loss; and some years we do well. So it’s your passion for farming and for what you do that gets you through it.’ For Jan Scheepers, there is no question. His blood is as green as a fresh stand of mealies.