Flowers and Trees of the Cederberg 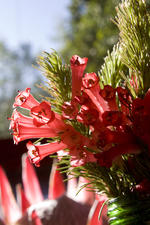 The northernmost extension of the Cape Fold Mountains is the Cederberg, which shelters some of the rarest endemic fynbos flowers. On the highest peaks of this range the snow protea, whose scientific name Protea cryophila means cold-loving, is sometimes found. Its striking white centre is encased in pink petals whose tips seem to be flecked with snow.

The most attractive flowering plants, such as Protea magnifica, the bearded protea, occur in the high-altitude zone.

The showy Leucospermum reflexum's fire-burst flower is well known in town gardens but grows naturally only in the northern Cederberg among the peaks of Krakadouw.

Erica flowers of yellow and pink sweetly scent the mountain air, while in the valleys wild almond, water witels, silky cone bush and the lovely yellow marguerite may conceal grey rhebuck and Cape grysbok. Klipspringer and steenbok frequent the waboom veld of the rocky scree slopes.

Although the waboom's excellent wood was much in demand, particularly by early settlers who used it for wagon building, these gnarled tree-proteas are still a common sight in the Cederberg.

On the lower slopes grow rooibos and the round-leaved buchu used in flavouring a reputedly medicinal brandy. Both species are now grown commercially on a large scale.

There are now few cedars left in the Cederberg and even under the Forestry Department's careful supervision it will take a long time before they are re established in reasonable numbers, as the trees take many years to mature. Periodic droughts and fires continue to take their toll of the gnarled, weather-beaten trees, and in many areas dead, sun-bleached stumps are a common feature of the landscape.

Only in extremely rocky areas, especially on mountain tops, are living cedars found. In the deeper kloofs rare remnants of high forest remain in the few specimens of rooiels and witels, yellowwood and hard pear, while drier kloof forest, represented by wild olive, silky bark and spoonwood, is more common in the valleys.

Spring, when wildflowers thickly carpet the ground, is the best time to see the Cederberg. The days are warm, the nights cold but not freezing, and the winter rains have left the streams brimming. The Olifants River valley at this time is flushed with bright yellow and orange daisies, colourful heaths and many unusual endemics.

Apart from the cedars, the floral splendour, the ruggedness and remoteness of the mountains, it is the fantastic weathering of the sandstone that makes the Cederberg unique. Weird and grotesque shapes rise from every rocky outcrop and are silhouetted like chess pieces, spears, armies, fluttering birds and winged gods against the sky.

©Chris Daly
The Valley of the Red Gods in the Cederberg.

The Valley of the Red Gods below the Wolfberg Cracks, the Wolfberg Arch and Maltese Cross below Sneeuberg are some of the grander weathered formations that have become familiar to hikers over the decades.