With a weight of 6 tons and a height that can reach 3.3 m to the shoulder, the elephant is the largest land animal in the world. Tusks of 90 kg have been recorded, but tusks of older bulls generally weigh 50 to 60 kg. Elephants can live as long as 70 years.
With as many as 50 000 muscles, the elephant’s trunk is very sensitive. It is essentially a modified nose, able to detect water underground. Using the finger-like appendages at the tip of the trunk, elephants can pick the smallest flowers and twigs, pick a thorn from their feet and pull out strong reeds or grass.
There is a common misunderstanding that the joints between the elephant’s feet and body are its knees. They are, in fact, its wrists. Elephants’ foot bones and hand bones are one and the same and have evolved to suit this four-legged mammal.
An elephant’s tusks are actually its upper incisors, growing continuously until the elephant dies at about 60 years of age. They use their tusks for obtaining food, self-defence, and males use it for fighting. An elephant’s skin is about 3 cm thick, although it is rather sensitive.

Elephants eat great quantities, and in a day can consume up to 272 kg (600 pounds) of tender shoots, grass and tree bark, drinking up to 200 litres of water in a single session. One elephant deposits about 150 kg (330 pounds) of dung per day, and drops a dollop every 15 minutes.

After a gestation period of 22 months, a calf weighing about 100 kg (220 pounds) is born. It is fully weaned normally between four to five years of age, and its mother generally produces one calf only once every 3 - 4 years. Elephants have no specific breeding period.
If a calf is orphaned, it will be adopted by a lactating female in the family or suckled by different females. They are very attentive mothers, keeping their young with them for many years to teach them elephant behaviour. The calf stays with its maternal group, even once its weaned. Its tusks come out at 16 months of age but are not visible until 30 months.
Females mature at about 11 years of age and stay with the maternal group, whereas males are expelled from the herd when they mature between 12 and 15 years. The males do not breed until their mid or late 20s, or even later - once they have moved up the social hierarchy.

Elephants live in strong family units consisting of cows, calves and young offspring, which are always led by an older female. It was once thought that these elephant families were led by bulls, however it was found that bulls are most often solitary or form bachelor groups. Female family groups are visited often by males looking for females in their oestrus cycle. Family groups that are interrelated may get to know each other well as they inhabit an area together. Elephants do not only drink large amounts of water, but also love wading and swimming.
Elephants may perform a mock charge as opposed to a serious charge. It is important to remember, however, that elephants are very intelligent animals and have very individual characters. The most ordinary signs of a mock charge are bundu-bashing, trumpeting, dust-throwing and making other noises, opening the ears and trying to come across as intimidating.
When aggressive or startled, elephants shake their heads and flap their ears against their heads. Once the elephant feels threatened, and intimidating mock charges have been unsuccessful, it will charge seriously. Signs of a serious charge are pinned back ears, and a lower trunk and head. The elephant will make a conscious decision of how best to react to their threat and its unfamiliar actions.
It is a common misconception that elephants flap their ears rhythmically when they are angry. However, they only do it to cool down and to get rid of insects, as they are dark in colour and have no sweat glands.

The elephant population has declined tremendously, as it was once found across the African continent. Large herds are protected in South Africa in the Addo Elephant National Park and Kruger National Park, which has aided the population growth, along with strict conservation efforts, from 120 in 4 locations in 1920 to 10 000 in 40 locations to date.

Ecosystems and the African Elephant 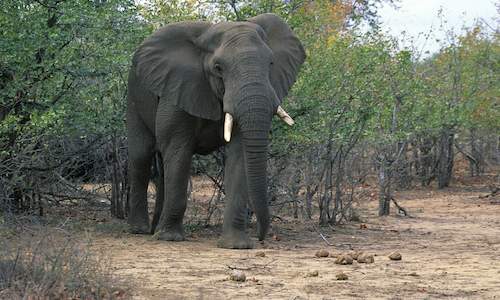 The African elephant is the largest and heaviest terrestrial mammal in the world....more 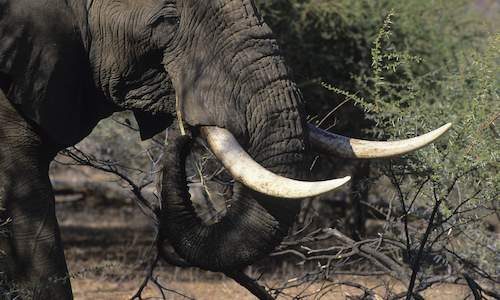 Elephants have unique teeth amongst mammals. Each tooth is large and oval in shape, flattened on the surface with transverse ridges of ename...more 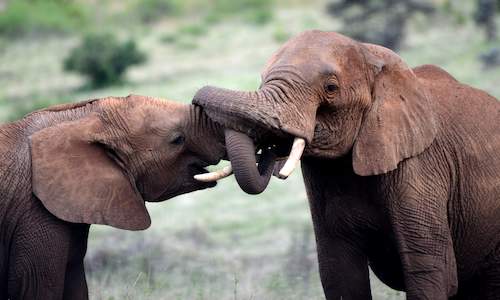 Elephants communicate through body posturing or vocally by use of trumpeting or even screaming to indicate anger or excitement....more 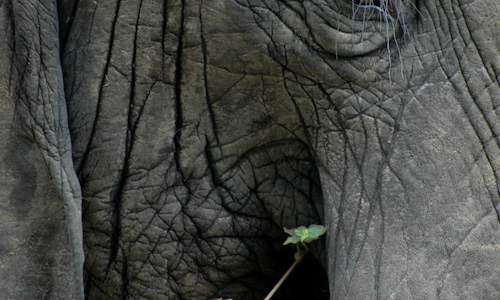 Elephants have an array of acute sensory perceptions to compensate for, or possibly resulting in, relatively limited eyesight....more 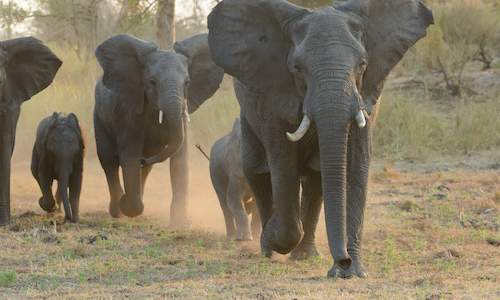 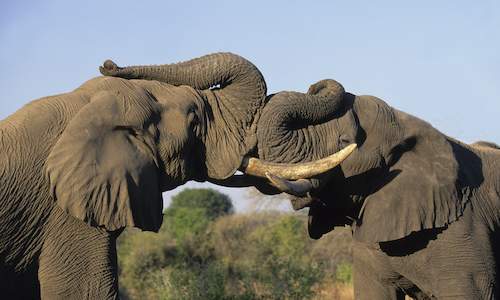 If elephant herds become too large they may split up with a group of closely related cows and their young forming a new herd....more

Elephants Giants of the Bush 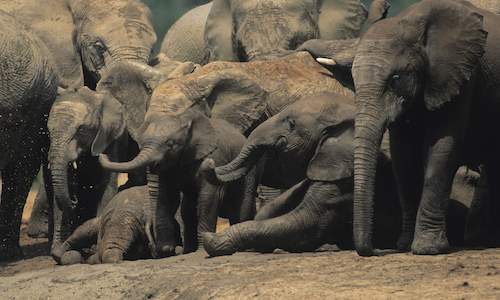 Elephants are among the four animals in the bush you don't want to confront, the others being lion, rhino and buffalo....more

How Do Elephants Stay Cool? 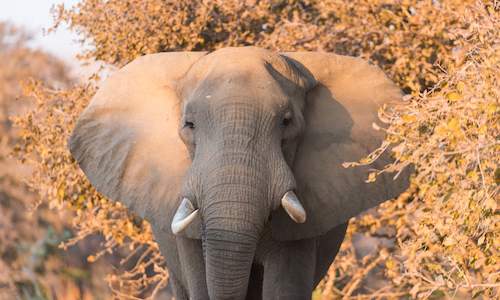 The ears of an African elephant are enormous with a bull elephant having ears two metres by 1.2 metres in extent and 20 kg in weight each....more

What Do Elephants Eat? 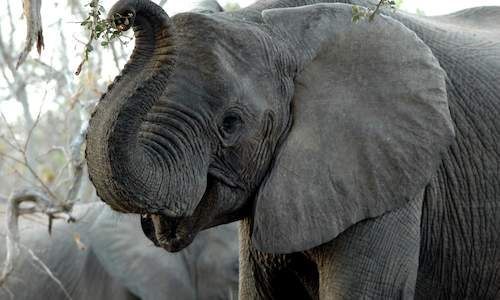