The Economics of Growing Food 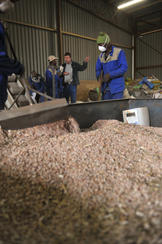 ©Eric Miller
Farmer, Jan Scheepers talks to workers before sorting and bagging beans for the market.

Farmer Jan Scheepers slides his notepad forward on the office table. Beneath the crest of arms printed in the top centre of the page and the words ‘Massey University’, most likely from one of his many trips abroad since winning the Young Farmer competition, he has scribbled a few notes, reminders to himself of the points he wants to make during the interview.

The man is systematic and clear about where he wants this conversation to go. A hand-scribbled star as a bullet point and ‘Economics rule: make profit – produce food’. The next point: weer, weather. That is what he is talking about now.

He scribbles the four points of the compass onto the page, then draws in lines to show how the prevailing hail storms move in an east-west direction in long, thin bands.

One of the pros of having his operation spread out across six properties, some of which are about 150 kilometres from one another, is that it spreads the risk a bit, particularly when it comes to the hail season.

Jan’s matt-black work boots scuff over the drying soil between rows of felled bean plants that are piled up and suffering the humidity cooked up in the post-rain sunshine. The pods have split open and dried to a brittle blonde, their contents spilled out onto the ground here and there.

He drops half a dozen market-perfect beans down onto the ground next to three soggy ones to demonstrate the worst effects of exposure to the elements: the damaged beans have been completely overrun by a solid rusty red. Even the pretty speckles have disappeared. You would be forgiven for thinking it is an entirely different plant variety.

This very local event, and a season full of similarly extreme weather, has pulled the profitability of this bean crop in one direction – down. Global forces pulled it in another. It is the same with wheat. It is the same with maize. In the end, this farmer, like so many others, has to dance like a boxer, ducking and diving in response to ever-shifting conditions in the global and local markets, in the weather, in regional politics.

Effects of a Weak Rand

©Chris Daly
Consumers feel the pinch of a weak Rand through rising prices of everyday goods.

The impact of such fluctuations was explained neatly in Business Report on 24 November 2011. Commenting on a 22% drop in the value of the rand relative to the dollar (from R6.67 to the dollar four months prior, to R8.50), the newspaper explained that it is one thing when the rand only weakens against the dollar, but when it is weakening against the currencies of all its major trading partners – the pound, yen, euro – things get a bit more rocky for South Africans, farmers and consumers alike.

According to the article’s authors Ethel Hazelhurst, Donwald Pressly and Asha Speckman: ‘Whether this is good or bad depends on who you are and how you look at it. Debate around the topic has often been heated.

Exporters should benefit – either through higher revenue or higher sales volumes. And over the past five years there has been a steady campaign by exporters, trade unions and some politicians for a weaker rand.

‘Consumers, however, will feel the pinch. Not only will the prices of imported goods rise, but local prices will react because a rising oil price has a domino effect through the economy, pushing up the costs of a broad range of goods and services. Moreover, domestic producers will face less competition from abroad so they will be able to charge more than previously.’

One of Jan’s rules of thumb is not to chase prices. A lot of farmers do that, planting too much of one crop when the prices are up, and often suffering at harvest time if there is a glut and prices drop. He prefers to stick to what he calls his planting rhythm – he has a planting rotation schedule, drawn up ahead of the season, and he sticks to that, regardless of the fussy and changeable markets. ‘Like the wheat this year, when we planted, the prices were the lowest in a lot of years, and yet we sold now at good prices.

So I kind of keep my rhythm with my crop rotation.’ ‘No one can predict how the markets will move,’ his wife Amelia interjects. ‘No one can predict that,’ says Jan, shadowing her. He will get some input from the weather experts – does the long-range forecast say it is going to be a dry winter and a wet summer again? – although they could also get it wrong.

The next planting cycle is predicted to be similar to the one that has just devastated his bean crop, so he will plant fewer hectares of beans and put in more maize instead. After all, beans are expensive to put in the ground and are higher risk in a season like the one they have ahead of them.

This is the kind of thinking that has got Jan Scheepers where he is today: 34 years old, a Farmer of the Year, and working off the debt on strategic assets that most only achieve when they are ready to hand over the reins to their sons one day, after several decades of hard slog. And so he goes into the next season, unflustered by the topsy-turvy markets, un-hurried by the debt, just working away at his fields for another year, in the hope of getting in a decent harvest.

The Force of Hunger

©Eric Miller
Rising food prices can cause civil unrest when people can no longer afford food.

Farmers are part of a long value chain that is about the business of food. And if forces exert themselves at any point across that value chain in such a way that the price of the final basket of food becomes unaffordable to the poorer masses, it can destabilise an entire region.

Food has become a political hotbed in the past half-decade, which could be seen when Mexico City erupted so spectacularly in 2007 in what has become known as the ‘tortilla riots’ when people took to the streets in response to a 400% rise in the cost of this staple unleavened bread.

Around the world, the price tag on staple foods rose precipitously – starting in 2006, peaking in 2008 – largely blamed on falling yields due to extreme weather events, the increasing appetite of the Chinese and India for grain-intensive meat and dairy products, market speculation, environmental decay and the shift of grains from plate to petrol tank as the biofuels market took off in the face of volatile oil prices.

The price of wheat went up by 130% between 2007 and 2008. Similarly, soya climbed by 87%, rice by 74% and maize by 31%, according to The Global Food Crisis, published in 2009, causing poorer countries to become politically unstable. Newspapers reported simmering political tension as a result of soaring food prices, sometimes erupting in outright food riots in West Bengal, India, Yemen, Burkina Faso, Jamaica, Nepal, the Philippines and sub-Saharan Africa.

Maputo’s ‘bread riots’ started after the price of this staple was hiked by 30%. It seems hard to believe that a shortage of something as everyday as bread, oil or milk could unseat dictators.

But the blossoming of the Arab Spring has been linked to rising food prices, amongst other things. Yes, the social rebellion started with the self-immolation of a young man, Mohamed Bouazizi, after he was roughed up by police. But the growing unhappiness was much broader than a bitterness about police thuggery.

The rebellion unseated Tunisian president Zine El Abidine Ben Ali before spreading to Egypt, Libya, Syria, Bahrain and Yemen. The rising cost of food in 2006 and 2007 drove 100 million more people into poverty and hunger. It helped unravel several decades of autocratic rule in North Africa and the Middle East. The mobilising force of hunger should not be underestimated.