The Early Days of Robben Island

The Europeans’ use of Robben Island

Robben Island was first used by the Europeans as a useful stop for hungry sailors on their way to the East. There is little evidence to suggest that the indigenous people of the Cape ever bothered to row across the rough seas to the Island. The Europeans would regularly stop at the island and harvest a boatload of seals and penguins, and records state that sailors could herd up to 1100 penguins in a single day. Indeed, the island’s current name comes from the Dutch word ‘robbe’, which means ‘seal’.

Robben Island’s first official role was as a storehouse or larder for the European sea-farers. From the 1600’s onwards, the European’s also used the island as an unofficial post-office, leaving letters and reports under specially marked ‘post-office stones’ for allied ships that came calling. There are also several reports of shipwrecked sailors who were forced to live on the island for months at a time, while waiting to be rescued.

Shipwrecks on the Shores of Robben Island

The seas around the island are notoriously rough and, to make matters worse, the island is surrounded by a fearsome barricade of jagged rocks that stretch out into the dark-green water. Combine this with the fierce winds and thick fog which can roll in off the Atlantic, and you have a recipe for shipwrecks on a grand scale.

Although they used to light signal fires on top of Fire Hill (now called Minto Hill), over 30 shipwrecks have been recorded on the shores of this tiny outcrop. About two thirds of these occurred before the lighthouse was built in 1863, but ships continue to be surprised by the island. The northern shore of Robben Island boasts the remains of at least three recent shipwrecks, all rusting away on the serrated rocks.

Britain in the Cape of Good Hope

In 1602, the Dutch East India Company (in Dutch: Vereenigde Oost-Indische Compagnie, or VOC) was established in Holland, and this determined little corporation (the first limited stock company in the world) made it their capitalistic duty to secure control over the route to the East.

To support this enterprise, the VOC started investigating the possibility of establishing a permanent European presence at the strategically important Cape of Good Hope, situated halfway between the Old World and the New World. This is a position it still holds today, both geographically and metaphorically. However, their rivals technically got to the Cape first.

In 1614, the British East India Company planned to settle 100 convicts in the Cape. Eventually an assortment of 18 or 19 men were duly selected and sent to the Cape instead of the gallows. They were the first group of prisoners to be ‘transported’, a practise that later became quite common and would eventually culminate in the Australian nation (who have always suffered from penal envy). The first Crosse-led British deputation to Khoikhoi resident of the Cape, Xhore, resulted in a skirmish in which several men were killed or injured.

This was described as a ‘misunderstanding’ by Xhore, who wanted to know why the British had left people behind to live on the Khoikhoi land. He offered only to help the settlers if England would support him in a conflict with the inland tribes. A short time later, there was another more serious clash between the ex-con settlers and Xhore’s people, and this forced the white men to jump in their little boat and flee to Robben Island.

After a rescue attempt went wrong, three of the survivors decided to remain on the island rather than return to England, and they may or may not have been subsequently rescued by a Dutch or Portuguese ship. The other three chose to face the music back home and went on board the New Year’s Gift.

Their time on the island had done nothing to reform the settlers, however, and the behaviour of the rescued men on board the Gift was declared so ‘lewd’ that they were often put into the ship’s stocks as punishment. Within hours of their landing in England, the incorrigible criminals had stolen a purse and were “executed upon their former condemnation, for which they were banished… but never pardoned.”

After the disastrous English attempt to settle at the Cape, the Europeans were much more circumspect in their ambitions. In 1652, a former ship’s surgeon named Jan Van Riebeeck was sent by the Dutch East India Company to establish a permanent refreshment station at the Cape.

The purpose of this enterprise was to supply the ships that stopped at the Cape with fresh fruit, vegetables, water and meat; all at a healthy profit of course. To do this, however, the new settlers would have to cultivate a vegetable garden, and negotiate with the local Khoikhoi for cattle and sheep.

The Dutch were serious about their mission and spent months getting everything ready. In due course, three ships set sail, carrying 150 men and a few women to their new lives at the Cape. It was to be the beginning of a great South African drama that would span the next three and half centuries. Robben Island served a variety of purposes over the years and it was a useful place for the Dutch settlers.

They made periodic visits to harvest seals and penguins, and the depredation of the native wildlife (once so numerous it was described as ‘wondrous’) was so widespread, it resulted in one of the first conservation orders in South Africa. This edict stated that the island’s seals and penguins could only be harvested under permit.

To enforce this decree, an overseer was sent to the island, and shepherds were placed there to protect the small flocks of sheep and goats from hungry sailors who might steal the animals and thus avoid paying the premium for buying supplies from the refreshment station at Table Bay. 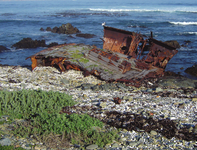 After Robben Island came under Dutch rule, the flocks grew and several men were sent to the island to build some shelter and plant a vegetable garden in 1954. Large quantities of sea-shells were also discovered on the island, which could be used to manufacture lime, and outcrops of good limestone and Malmesbury slate were identified.

The first official group of prisoners was sent to the island in 1657 and put to work quarrying this stone, which was used to build the houses and roads of the fledgeling city of Cape Town. This group of slaves and exiles did not prove to be a satisfactory workforce, however, and the Company had similar difficulty in finding competent overseers who could bear to live on the desolate isle.

Sickness and hunger stalked these early inhabitants, but the livestock flourished and, by 1666, the island boasted with 350 sheep, 10 cattle, 40 goats, 30 pigs and 25 people (including 14 convicts). Ten years later, there were over 300 sheep and 1000 cattle.