Desmond Tutu The Man Behind the Legend

A Man of Many Layers

Desmond Tutu has been described as a man of many layers and contradictory tensions. The people he encountered during his study in England in the 1960s were shocked by his simultaneous African warmth and lack of inhibition. He soon endeared himself to them, an ability he maintained throughout his lifetime.

He is known as being a sensitive, passionate soul: something his wife often teased him about. With a gentle and caring temperament and rare honesty, he is said to be slow to anger and would never intentionally hurt someone.

Tutu is also known for being hardworking and highly intelligent. A courteous man, he is passionate about upholding African traditions and values.

He pays close attention to people, making sure to greet, remember important dates (like birthdays), thank people, be punctual and never partake in gossip.

Working as a priest he made special effort to spend time with and visit the members of his church. Tutu speaks English, Xhosa, Zulu, Sotho and Tswana and has often been praised for his public speaking. His speeches are known for being eloquent, witty and captivating.

His use of language and ability to tell a good story leads back from his love of reading and literature. He also enjoys sports and classical music. Coining the term “rainbow nation”, Tutu supports the concept of Ubuntu.

He defines Ubuntu as: “gentleness, compassion, hospitality, openness to others, vulnerability, being available to others and knowing that you are bound up with them in the bundle of life”. He favours the Xhosa saying “a person is a person through other persons” to illustrate his views on Ubuntu.

Tutu describes himself as a socialist. He believes that the survival of the fittest approach of capitalism encourages some of the worst features in people.

Despite his alignment to socialist ideals, he is critical of Marxism-Leninism form of socialism, which promoted communism and atheism. He compared the way Marxist governments treat their populations to the way the National Party treated South Africans. Instead, he is an advocate of black theology and African theology, seeking to merge the two schools of Christian theological thought.

He argued for the rejection of Western values to be viewed as superior to African values. He promotes the idea of an underlying unity of Africans “All of us are bound to Mother Africa by invisible but tenacious bonds. She has nurtured the deepest things in us blacks.” -

Tutu favoured sermons and addresses instead of academic essays to share his ideological views. He is especially interested in questions posed by African Christianity such as how to replace Christian expression of faith with African ones and how to liberate people. He is critical of African theology’s shortcomings in addressing contemporary social problems and suggests it should learn from black theology in this regard. 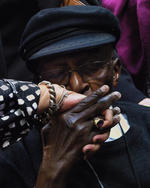 A committed Christian since childhood, Tutu is deeply entrenched in the religion’s ideologies and practices. He was attracted to Anglicanism because he thought it to promote tolerance and inclusiveness as well as to use reason alongside religious scripture and tradition.

Despite this, he also maintains that he is not a politician and tries to avoid aligning himself with any political party. He rejected the suggestion that he should take political office when the idea was presented in the 1980s.

In his opposition to apartheid governance, Tutu’s approach was that of democracy, human rights, tolerance and the promotion of communication and accommodation between enemies. He spoke out openly against the apartheid system, likening the ethos of the National Party to that of the German Nazi Party and even comparing apartheid policy to the Holocaust.

He stood firmly for racial equality, calling apartheid evil and criticising the National Party for trying to slowly exterminate the black population.

Even though Tutu opposed white supreme rule, he never became opposed to white people, recounting the many positive experiences he had with white people both in South Africa and abroad. His dream was for the reconciliation between the different races of South Africa after apartheid was fully dismantled and all South Africans were given equal rights.

He referred to his cause as the winning side and told white audiences that when the oppressive government was overthrown black people would remember who their friends were.

When Tutu conducted public prayers he never forgot to mention those who upheld the apartheid system along with its victims. His reason for this was the belief that the perpetrators of apartheid crimes were not some kind of demons, but ordinary people who deserve to be shown compassion.

During his work for the Truth and Reconciliation Commission (TRC), Tutu advocated a Christian model of reconciliation. He believed that those involved in the apartheid struggle should repent, take full responsibility for their actions, ready to accept the consequences, but that victims should act with mercy and be generous with their forgiveness.

Tutu showed courage in speaking out freely about contentious issues, however, his activism remained non-violent. He never used violence as a threat and was careful not to endorse it.

He criticised both the apartheid government and anti-apartheid groups for their use of violence to achieve their ends. Instead, he advocated for foreign economic pressure to be put on South Africa even though he was met with backlash from critics who said that this measure would only be to the detriment of already poor black South Africans.

Desmond Tutu did not hold back in his criticism for leaders who he thought behaved immorally. He spoke out against the black leaders of the Bantustans saying that they were corrupt and only looking after their personal interests to the detriment of the people they were responsible for. Western political leaders received Tutu’s criticism for maintaining links with South Africa. He said that their support of the racist policy implemented was racism on their part.

The response to Desmond Tutu has been varied throughout the years. Today he is one of the most highly respected religious leaders of South Africa, but during the 1970s and 1980s opinions of him were usually either that of strong love or hatred.

For many black South Africans, he symbolised black achievement and served as a voice for the voiceless, although others criticised him for speaking on their behalf without consulting community leaders and for being too lenient with white people.

Many conservative white South Africans were angered at his call for economic sanctions against the country, accused him of being a tool to achieve communist ends and feared that he would incite violence. The apartheid government did their best to discredit him with their campaigns that manipulated his words in order to disfigure his public image.