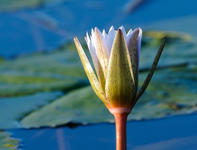 Description of the Day Waterlily

A showy freshwater plant, known for its flat floating round leaves and pointy flowers rising above the surface of the water. The day lily only opens during the day and closes its flowers at night.
These plants have spreading roots (growing from a black rhizome) anchoring it in the mud and carries its leaves and flowers on long spongy stems. Its leaves have deep V-notches and the scented flowers may be blue, pink, yellow or white. While there are around 60 species worldwide, only the day waterlily species occur in South Africa. The flowers can be seen from September to February.

Habitat of the Day Waterlily

Waterlilies grow in freshwater water bodies and in slow-flowing rivers and is found in all provinces of South Africa.

After pollination by bees or beetles, the flowers are pulled underwater until the seeds ripen. The seeds then pop to the surface of the water where it is borne away by the currents. After floating for a while, the seed sinks and germinates in the mud.

The waterlily is one of the most honoured plants on the planet. Legends have it that it that when Buddha died, flowers starting blooming wherever he had walked. The waterlily is the national flower of Sri Lanka and Bangladesh.
©2021 South Africa Online (Pty) Ltd. SouthAfrica.co.za. All Rights Reserved.