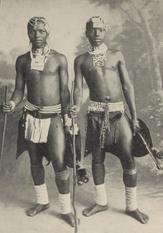 People wear clothes for the obvious reason that it is essential to protect their bodies against different weather conditions. Clothing shields them from the sun, the rain, snow storms, and the fluctuating temperatures to which they are commonly exposed on a daily basis.

But dress has since earliest times also been used to satisfy other needs, most obviously the universal human concern to enhance the appearance of the wearer. In some situations, doing so serves to reinforce social and political hierarchies, while in others it has played an important role in rituals linked to, for example, courtship or initiation.

Regardless of the context or purpose, people rely on a host of accessories to mark aspects of their identity. This includes permanent body modifications such as scaring and tattooing, and others like adopting distinctive hairstyles.

Feather headdresses formed an integral part of the dance costumes worn by Zulu men on special occasions like the annual First Fruits Ceremony, which was held at the king's royal homestead in early December....more

Because leopards were regarded as symbols of power and regal authority, necklaces made from their claws were reserved for use by kings and chiefs. Horn and bone facsimiles of these prestige items were also worn by other important individuals....more

In the past, kings, chiefs and other dignitaries commonly distinguished themselves from ordinary people through their clothing. They also did so by wearing various accessories that others were strictly forbidden to acquire....more

To this day praise singers play an integral role in proclaiming the power and achievements of important leaders. In post-apartheid South Africa, they celebrated the lives of key political figures like Nelson Mandela....more
©2022 South Africa Online (Pty) Ltd. SouthAfrica.co.za. All Rights Reserved.