In the past, kings, chiefs and other dignitaries commonly distinguished themselves from ordinary people through their clothing. They also did so by wearing various accessories that others were strictly forbidden to acquire.

This included trade items like blankets, the feathers of rare or exotic birds, the skins of some wild animals and different forms of adornment made from imported brass and copper.

When the English artist, George Angas, visited the Zulu kingdom in 1847, he recorded blacksmiths smelting metal from locally-sourced ores that were used to produce hoes, the heads of assegais and utensils for carving spoons and other household items.

These blacksmiths also made prestige items from imported brass, notably neck rings and armbands, that were reserved for members of the royal family and exceptionally brave warriors. 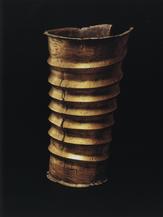 The brass rings that were subsequently obtained from traders living in Natal were hollow. Long brass armbands were worn on the lower right arm. Reserved for important dignitaries and seasoned warriors, they were used on special occasions like the annual First Fruits Ceremony. Prestige items like these played an important role in reinforcing social and political hierarchies.

While some izingxotha have concentric ridge-and-groove motifs like this example, others either had ridges with notches cut into them, or they were decorated with the amasumpa patterns also found on headrests from the Zulu kingdom. The latter are sometimes referred to as ‘warts’ but were probably intended to signal the idea of wealth in cattle. 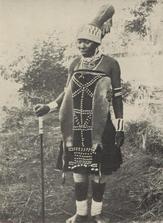 Prior to the growth of the Natal trade with British merchants in the 1820s and 1830s, these imported metals, exchanged for ivory, were obtained from the Portuguese, who established commercially lucrative connections with inland communities from their stronghold at Delagoa Bay, now Maputo, in present-day Mozambique.

Imported metals were so valuable that people living to the south of the Zulu kingdom are known to have killed wealthy refugees crossing the Thukela River for their brass ornaments. Some of these spoils appear to have been traded further, across the Drakensberg, into present-day Lesotho. Less precious brass beads and studs were distributed more widely. In the Colony of Natal, they were commonly used to decorate the protective pregnancy aprons worn by married women.