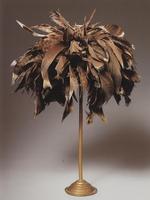 Nineteenth-century travellers to the area often noted the extravagance of these costumes, especially those with the feathers of rollers, eagles, and ostriches. The most desirable feathers, like the tail feathers of the Knysna lourie and the purple-crested lourie, were reserved for regiments favoured by the king. 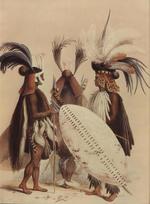 The costumes and feather headdresses worn by Zulu regiments at the annual First Fruits Ceremony were recorded as early 1847 when the artist, George Angas, travelled to the royal homestead of the third Zulu king, Mpande, where he sketched warriors who were later included in his folio volume documenting his visit to South Africa.

He depicted a member of one of these regiments wearing ostrich and blue crane feathers in addition to leopard skin lappets. The head of another is adorned with the feathers of a long-tailed finch.

Ostrich feathers for a Bantwane bride.

Because it is a transaction between two families, or groups of people, and their ancestors, rather than between two individuals, marriage remains one of the most important rites of passage in traditionalist African communities.

Among the Bantwane, some brides still wear a tlopo, which is usually made from clay and, less often, from hair cuttings collected over a long period of time. To this day, these brides also decorate the tlopo with buttons, beaded ornaments and brightly-coloured ostrich feathers.

In the Colony of Natal, south of the Zulu kingdom, young men fashioned extravagant hairstyles that were described by Natal’s Immigration Agent, Robert Man, in his Descriptive Catalogue of the Colony’s Contribution to the London International Exhibition 1862.

Man noted that these men sometimes added fragrant Tambooti wood shavings to their hair. Hairstyles like these, which among late 19th century Zulu-speakers were referred to as isihlut(h)u, i.e. hair that has been grown to form a thick mass, were frowned on by older men, one of whom complained that “A young man who has an isihultu is always fiddling about with it, scratching his head while talking, and so forth.”

In the past, people often took great pride in growing their hair. When Monica Hunter documented various aspects of the lives of the Mpondo in the early 1930s, she recorded examples of spectacular stylishness among both men and women.

Many of these images highlight both the inventive use of extensions and head wraps, and the artful draping of the body with blankets and cloths. Ornaments such as armbands and bandoliers fashioned from leather belts were also common.