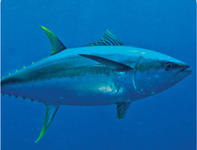 The body of the tuna is slender and rounded, narrowing at each end. They have large mouths and pointy snouts. The two dorsal fins fold into grooves. They are predominantly silver in colour with darker markings, and some have blue or yellow fins.

Tuna belongs to the Scombridae family which comprises of 15 genera and 51 species. They can be found in large schools at times. Tuna are able to keep their body temperature above the ambient temperature which allows them fast bursts of speed and making them fast pelagic hunters. The largest of the species is the bluefin tuna. They are pelagic spawners.

Tuna feed on other fish, crustaceans, squid, and some feed on plankton.