© Dr Peter Magubane
Participants at coming out ceremonies include initiated men, as guardians to the initiates.

Today the Tswana can be divided into very many locally autonomous, though subject to the laws of Botswana or South Africa chiefdoms, whose size varies from a few thousand to hundreds of thousands, the larger including Botswana's eight main tribes. Each manages its affairs under a chief 'kgosi', but there are great differences between tribes in Botswana and South Africa. The Tswana in South Africa previously fell under the Bophuthatswana Bantustan's homeland administration.

Each tribe has its own territory and name, the latter usually derived from a past chief or the founder of the ruling dynasty, sometimes from the totem of the royal family, the site of a former capital, or an historical incident.

Each tribe has mixed origins, which means that members of a single tribe may differ from one another in customs and language. This is more noticeable where people incorporated into the tribe prefer to remain distinct, and use the differences as a symbol. Tswana tribes are not, and have never been, closed, with fixed members. They are associations of which people may become members by birth, absorption, conquest or voluntary incorporation. Members may also be expelled by the chief, or leave voluntarily to join another tribe. 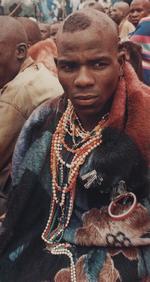 ©Dr Peter Magubane
A Tswana man dressed in traditional attire.
Today, many Tswana live in cities such as Johannesburg do not formally associate themselves with any tribe, although all recognize association with a totem and thereby acknowledge a genealogical relationship to others who share that totem.

A similar process of incorporation to that whereby tribes were formed, albeit on a much larger scale, created what is today Botswana.

Its groups were brought together into one as a result of colonial intervention which created the Bechuanaland protectorate that later gained independence as Botswana.

Attempts at Tswana consolidation within South Africa constituted a much more complex process related to the apartheid government's creation of the Bophuthatswana Bantustan, an entity that has been dismantled under the post-apartheid dispensation.

The Tswana chiefs recognized by the apartheid system continue to claim that status and the right to rule their people.

Totemism, the veneration of an animal, plant or object, has long been an important feature of Tswana society. Each person associates with a totem, and all those associated with that totem are said to be related to one another patrilineally, normally taking the totem of their father, and father's father. People with the same totem claim that they can trace their genealogical relationship to one another.

Totemic association has long cut across tribal membership. Members of one tribe have never been associated with one totem, nor have those associated with a totem necessarily been members of one tribe. For example, the Ngwaketse have been associated with 22 different totems even though members of the chiefly dynasty share one totem. Many myths lace Tswana folklore, accounting for how each totem came to be adopted. Codes of behaviour have been drawn up around these myths, and failure to observe them requires the perpetrator to undergo a purification ceremony to prevent illness or other misfortune.
©2019 South Africa Online (Pty) Ltd. SouthAfrica.co.za. All Rights Reserved.