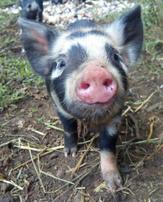 ©Jens-Birger Gielbelmann of Zenzele Farm
The Kolbroek is an indigenous South African breed that looks as if it is wearing spotted pants.
The Kolbroek is an indigenous South African breed. Various theories exist about the breed’s origins and how it derived its name, one being that the name refers to the spotted appearance of the breed since the Afrikaans word “Kolbroek” can be translated into “spotted pants” in English.
The breed is great for outdoor production, as they are hardy, easy-going, excellent foragers and able to survive on very little. According to David Visser’s book, Modern Pig Production, they will eat almost anything edible, whether it is fallen fruit in an orchard, vegetable waste from the kitchen or crop residues from the garden. Their dark skins also render them less vulnerable to sunburn than the white breeds.
The sows are docile and make good mothers. They are moderately prolific, producing litters varying between 6 to 9 piglets. Crossings with breeds such as the Duroc and Large White produces progeny with improved growth rates, feed conversion as well as meat and carcass quality. Kolbroek meat on its own is not in high demand in the mainstream market due to the meat characteristics and stigmatisation, but there seems to be a slight growth in demand from traditional, the slow food and free-range market.

©Liezel Grobler, SA Stud Book
The Piètrain are primarily crossed with other breeds to improve meat yield.
This medium sized white breed with black spots originated in the village of Piètrain, Belgium. It has shorter legs than most breeds and is stockier in build and quite broad around the back. The black hair is not as deeply pigmented as other black or black spotted breeds.
The first Pietrains were imported into South Africa in 1997. The boars are well muscled and ready to be used for reproduction when they are around eight months old. They are primarily used on other breeds to improve meat yield. The sows, while prolific, are generally poor mothers.

©Liezel Grobler
There are hardly any purebred Large Black pigs still available.
The Large Black a large all-black pig with large and lopped ears that originated from the Old English Hog established in the 16th and 17th centuries. It was first imported into South Africa around 1910 and was the most popular breed in the country until improved white breeds became available. It is highly unlikely that purebred specimens are still available in the country.
The breed is great for production outdoors, as they are hardy, easy-going and excellent foragers. They are also less vulnerable to sunburn, than the white breeds. The sows are docile, prolific, make good mothers with exceptional milking ability and are able to rear sizeable litters off simple rations.
Over the years, the meat has become stigmatised because of the breed’s black colour and the black pigment, causing it to resemble round black seed in the meat, has also rendered it unpopular with baconers. Niche markets for Large Blacks and their crossing might however exist, especially in traditional, the slow food or free-range markets.

©Joy Schoenberger
The Hampshire has lost favour because of it carrying a gene that negatively affects meat quality.
The Hampshire derived from the old English breeds. It is a black pig with a band of white skin and hair surrounding the shoulders and sometimes extending down across the forelegs. The neck of this breed is longer than that of most other commercial breeds.
The breed was first imported into South Africa during the 1980s to make available a new breed for crossbreeding. While still found on many farms in the United States, the breed has lost favour in European countries, Canada and even South Africa because of its dark skin colour and it carrying a gene that has a negative impact on meat quality.
©2020 South Africa Online (Pty) Ltd. SouthAfrica.co.za. All Rights Reserved.