©Marinda Louw
A herd of Northern Cape Speckled indigenous goats from the LGL stud north of Pretoria.
Migration nations from central Africa migrated southwards to escape tsetse fly and tick-borne diseases and brought with them a mix of long- and short-eared goats.
These goats could live on almost every sort of plant material and survived and reproduced in very harsh conditions. Settling in the thorn-bush country of the Eastern Cape, goat farming flourished. Here local farmers acquired short-haired lop-eared goats which “opened up” the thorny vegetation for Angora goats, sheep and cattle farming.
White goats were preferred as they were easier to spot and soon breeding with a specific strong dapple-coloured male goat resulted in the first Boer goat stud on the farm Kaalplaas near Cradock.
Extensive farming on natural veld is possible in large areas of South Africa and it often makes economic sense to combine more than one type of livestock species such as including goats into the livestock profile of a farm. Goats have great potential for development; this also includes the commercialisation of indigenous goat farming and developing related products such as leather. 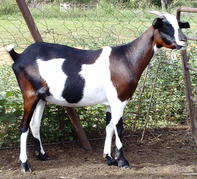 ©IVG
A Mbuzi ewe - note the glossy coat.
The Nguni type (Mbuzi) is probably more abundant than the other distinct types of indigenous goats and is often found in the higher rainfall areas of Southern Africa.
Mbuzi goats are compact and small to medium framed, with females much smaller than the males. The profile of the face tends to be flat or slightly concave, although some males have a slight Roman nose. Horns and beards are present in both sexes.
The Mbuzi goat is a multicoloured breed, with a wide variety of colours and patterns a short, glossy hair coat. Some goats may grow cashmere in cold winters. 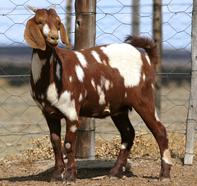 ©IVG
A Xhosa Lob Ear maiden ewe.
The Eastern Cape Xhosa lop-ear goat is a medium to large muscled goat. The face is rather long and convexed with lobed ears. Horns are present in both sexes, but beards are present in males and not often in females. Male beards are large. A wide variety of uniform colours such as white, black, brown, and red-brown, pied (two or more different colours), speckled and especially spotted, flowery and marble patterns, and all combinations of these colours occur. Most goats have a short, glossy hair coat, and are inclined to grow cashmere in cold winters.

©Deon Vlok
The Northern Cape Speckled indigenous goat ecotype.
The Speckled goat originated in the dry Northern Cape and was taken by pioneer farmers to Namibia where some Namibian farmers kept them pure. The Speckled is a well-muscled, medium to large goat. It has large lob ears and both male and females have horns. Beards are present in males, as well as in some females. Male beards tend to be large.
The Speckled goat's head and legs are almost a solid colour, with a white blaze on the forehead between the horns. Its whole body is white, covered with red, red-brown or black spots with a dark stripe on top of the back, and on the front of the neck. Most goats have short glossy coats and are inclined to grow cashmere in cold winters.

©IVG
One of the four indigenous veld goat ecotypes, the Kunene are seen here in their natural environment.
Well adapted to the harsh climate of the Kunene region in Namibia, this goat is a slender large framed breed with thin legs often found with the nomadic Himba people. The goats are excellent walkers and can go long distances to find water. These goats have long narrow faces with large droopy ears and horns are present in both sexes. The Kaokoland goat is a multicoloured breed (uniform and speckled) with short straight to long slightly curly hair.