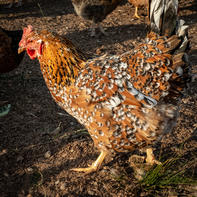 Using basic stockman’s skills and your senses will help you to identify problems before they get out of control. Here is advice from the Agricultural Research Centre’s Onderstepoort Veterinary Institute on what to look out for:

©Chris Daly
The distribution of the birds may indicate whether birds are cold or comfortable.
When entering the production area, look at the distribution of birds. Birds that are cold will huddle together, while birds that are hot will collect in cooler areas and either stand or lie down and gasp in an attempt to cool themselves.

Crowding at feeders or drinkers might indicate that there are not enough drinkers or feeders, which will result in competition and weak birds always receiving less water or food than their stronger counterparts. Draughts may also result in birds collecting in draught-free areas.

©Chris Daly
Look at the general appearance of the birds. Do they look healthy, depressed or bedraggled. Are there signs of feather pecking? Do you see bald patches on the birds?

Look at the size of the birds. Are all birds the same size or are some smaller than others? What could be the reason for this differences? Were some of the birds weak to start with, are they sick or are stronger birds preventing them from getting to the feed?

Next you need to inspect different parts of the body from head to tail.

When looking at the beak, it should be a normal shape without any missing parts except if it is a layer since suppliers trim the top part of the beak to prevent layers from pecking each other in the cages. The beak is usually closed during normal conditions, but will be open with the bird breathing fast when the nostrils are blocked, the bird is under stress or feeling too warm. The beak should not feel soft and rubbery. The neck should be strong and straight to keep the head high. It should not be weak and twisted.

The legs should be strong, straight and smooth, usually with a yellow colour. There should not be any cuts, swelling or crusts on the legs and the birds should be walking normally, without limping.