©Leonie Joubert
Marion Island has several different terrains.
Knowing all the plants and animals makes it easier to see where each prefers to live, as one climbs the gradients. Marion Island’s lower slopes - from the coast up to about 500 metres above sea level - are covered with an undulating skirt of mossy mires, less moisture-dense fern slopes, and the occasional fell-field (wind desert), edged with a detail of frilly black lava rock and the vacillating spumes of green breakers. Lush, nitrogen-rich temperate grasses make comfortable homes for birds and mammals. There are no roads or pathways on the island. Getting anywhere is by foot alone and usually dressed up in thermals, a waterproof outer layer, and industrial- strength gumboots. It's hard work stepping gingerly over mires, hoping not to punch a foot through the thin skin of vegetation into the belching mud below. It's like walking over a bowl of half-set jelly.
Dotted around like rusty pearls on fabric are iron-red volcanic cones. To summit these scoria mounds is like walking up a mountain of brick chips - two steps forward, one slipped back. Their upper slopes seem lifeless until you reach the craters, some of which are often full of water and fringed with green life. There are no trees or shrubs in this strange world.
Inland of the squelching coast is Marion's darker side. At about 500 metres above sea level, the island's skeleton protrudes - jagged and unforgiving - through strangely primitive plants such as mosses and liverworts. Young rock prickles from the ground in vicious, sharp barbs. Here and there the older weathered grey lava shows through younger deposits of rock that have tried to inundate everything over time. Above 800 metres, the only vegetation to survive is lichen and, at the summit (1 230 metres), there is virtually no plant life at all. Here, too, red cones bejewel the higher slopes. The desolation is breathtaking. 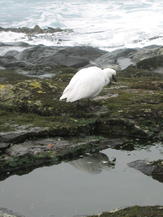 ©Leonie Joubert
Lesser Sheathbill on Marion Island.
Marion Island is home or occasional pit stop to the Southern Ocean unique birdlife. The paddy (or lesser sheathbill) is the only land-based bird here and dashes about like a bantam hen, pecking at insects. A bird-spotter 's trophy with its ice-white feathers and coal facemask, the paddy only occurs on a few sub-Antarctic islands. King penguins are the jesters of the islands, with their magnificent golden earmuffs and bibs, morning-jacket grey backs and ivory breasts. They waddle about, unperturbed by the intrusion of people on their beaches. They are very laid back, not having known any terrestrial predators. Even the sealers in the 1800s - who killed, skinned, boiled, ate and probably smoked anything that moved on the island - did not make enough of an impression on the animals to leave them skittish.
They are also surprisingly curious and will tug and nibble at your clothing if you sit still long enough. Their cousins, the macaroni and rockhopper penguins, have comically plumed brow feathers which bob and dance like a tribal headdress. Rockies - not much bigger than rugby balls - find bouncing a far more efficient way of getting about than bipedal walking. With two sprung feet and little flippers, they navigate daringly up cliff faces with extraordinary deftness.
Other albatrosses are found here too: the grey-headed, the Atlantic yellow-nose, the sooty and light-mantled albatrosses are all smaller but no less beautiful. Then there are the northern and southern giant petrels and their many cousins, as well as skuas, gulls, terns and the skittish gentoo penguin. There's another bird that should, if it cared about such things, bemoan the injustices of social hierarchy. The Crozet shag used to be called the imperial cormorant before it was renamed. 'That's like being demoted from royalty to the village tart,' one scientist observed to the backdrop of squawking shags.

©Leonie Joubert
King Penguins on Marion Island.
On Marion island, you get so close to nature that it includes you in its mating rituals. A radio operator once caused quite a stir when he visited a macaroni penguin colony. Resplendent in scuffed black, his steel-toed Wellingtons soon caught the attention of frustrated bachelors hanging round the periphery of the colony. Male macaroni penguins try to win a mate by dropping stones at her feet in a show of home-making prowess. Before long the radio operator had a cairn growing lovingly at his boots. Each bird twittered and twitched at his feet, plumed brow-feathers aquiver, appealing to the boots to declare their love.
Wandering albatrosses are born and bred for the Roaring Forties. Down here they harness the prevailing westerly winds with their impressive three metre wingspan and circumnavigate the globe in the high, southerly latitudes. These birds, like giant seagulls with strange dodo-esque heads, are believed to spend their formative years at sea. They don't appear to come in to land for as many as seven years or more in their youth and, when they do, they alight on the island of their birth. Here they will engage in an intricate courtship dance, pick a mate and remain faithful until death tears them apart. The life history of these extraordinary animals is only now being understood, even as their numbers dwindle on the sharp end of long-line fishing hooks.

©Leonie Joubert
Elephant seals on Marion Island.
The largest mammal found here is the southern elephant seal, an animal of enormous bulk that can swim to extraordinary depths. Scuba divers stay above thirty metre depths unless they have back-up. South African extreme diver Nuno Gomes achieved a new world record by diving to 318.25 metres in the Red Sea in June 2005 - it took him 20 minutes to reach that depth and 12 hours of laborious decompression to reach the surface again. The deepest free dive has reached 171 metres. Elephant seals go down more than 1 500 metres. Between dives, the animals will ventilate their lungs for about three minutes, breath out and then head down into the deep where they can stay for as much as two hours on a single exhaled breath. They have more haemoglobin in their blood and myoglobin in their muscles compared with humans and a relatively high volume of blood. With more places to store it, the animals can bank plenty of oxygen and survive between breaths for these improbable lengths.
Pressure increases by one atmosphere every ten metres under water. At 1.5 km down, therefore, the pressure is 150 times that of the surface. To survive this crushing pressure, elephant seals have evolved without any cranial sinuses; their lungs and ribcages are collapsible, while their incompressible muscles and bones consist of 85 per cent water, which counterbalances the immense pressure. With no oxygen in their lungs and a system that does not allow gas exchange, the seals do not experience the problem of nitrogen gas bubbling in the blood stream when they resurface. This means they are spared the pain, convulsions and loss of consciousness associated with the 'bends' that human divers suffer if they surface too rapidly. Elephant seals can also tolerate higher levels of nitrogen, saving them from nitrogen narcosis.
Antarctic and sub-Antarctic fur seals have deceptively cute puppy-dog eyes. But they easily charge in a volley of emphysemic, rattling coughs. Their bite can slice effortlessly through gumboots and, if they hit flesh, can bring on sepsis in hours. Further down this food chain are all the smaller animals - weevils, the anachronistic flightless fly (which, if it could fly, would be blown out to sea), beetles, moths, a single wasp and gnat, springtails, tardigrades, a midge species and a handful of other tiny beasts. All these creatures - from the 3.5 ton male elephant seal down to the microscopic water bear - have inextricably woven themselves over thousands of years into a complicated food web where, ultimately, every species influences another in some way.