The Value of Nature
Earth and Environment

©Roger de la Harpe
Aerial view of a sugar mill at Sezela, KwaZulu-Natal.
In the global balance sheet of natural resources, we are using more than we have in the bank. We are living on borrowed time. Let's not get bogged down in numbers - by how many tons our fish resources have reduced; the extensive hectares deforested and turned into desert; the vast quantities of poisonous lead burned into the air; the countless number of square kilometres of ground sterilised by irrigation or encrusted beneath tar and cement. It would be preferred not to talk about how we ascribe value to aspects of nature that are not traded on the Johannesburg Stock Exchange (JSE) or Wall Street - things to which we cannot easily attach a price tag.
Consider this - people who own dogs are found to be six times more likely to survive a heart attack, probably because owning a dog stimulates your nurturing instinct and the daily walks do wonders for your cardiovascular health. You can thank the wolf family for that benefit. If you find yourself behind bars, your stress levels will be significantly lower if you have a view of nature or farmland from your cell window. And next time you go for root canal treatment, ask your dentist to install plants in the surgery and pictures of nature on the ceiling because they will help to calm your nerves. Edward Wilson, who penned the facts noted above in The Future of Life, lists the approaches we can adopt with regard to valuing nature. Anthropocentrism, he says, dictates that 'nothing matters except that, which affects humans'. The problem with taking an economic approach to nature is that it is inherently anthropocentric. 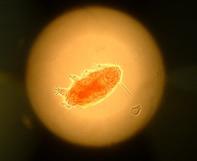 ©Leonie Joubert
Animals come in all shapes and sizes, this is a Tardigrade, a eight legged segmented micro animal.
Economics is all about goods and services. As soon as we use that standard to measure the value of nature, the outcome is limited to those aspects of nature that benefit or support our survival and comfort. First, these aspects exclude a great deal of nature. Second, we don't understand ecosystem functioning well enough to be able to make a solid judgement call. A food plant is easily measured in rands and cents, but what about its pollinating insect that we have not yet discovered?
Wilson offers other approaches. Pathocentrism, he says, attributes greater value to 'chimpanzees, dogs, and other intelligent animals'. Extrapolate this to a scenario that values all intelligent people but fails to value the dim-witted, then you're knee deep in an ethical quagmire. Meanwhile, biocentrism acknowledges the intrinsic right to life of all living organisms. It might assist, in view of this, to remember that we are related to every other living organism on the planet. We share a common ancestor, a single-celled organism that lived three and a half billion years ago and looked something like present-day bacteria.

©Nigel Dennis
Flightless Dung Beetle is endemic to South Africa and has untold benefits to the ecology and economy to our land.
In terms of these value systems, does it matter that the extinction rate is a thousand times higher now than in fossil records, or that in the future it is expected to be ten times higher than it is at present? In the cold, hard light of geological time, it does not matter at all. About 99 per cent of all the life that has ever existed on the planet has fallen by the wayside. Sometimes it has been through a slow process of natural attrition; at other times it has been fast and cataclysmic. But always natural. This is probably the first time that this level of extinction is being achieved by the success of a single species out-competing others. Certainly, it's the first time it is being done knowingly, surely the biggest irony of all.
We could try to persuade the planet's governments and decision-makers to act for the conservation of the environment by taking a bio-economic approach to calculating the exact monetary value of everything. We could point out, for instance, that the Cape Floral Kingdom brings in around Rl0 billion annually to the Western Cape coffers. That figure was arrived at after calculating the annual income from ecotourism (R6 406 million), the harvesting of fynbos for thatching, cut flowers and the like (R78 million), and exploiting marine products along the region's coastline (R1 300 million).
The Cape honey bee pollinates R1.8 billion worth of agriculture in the Western Cape every year, including berries, fruit, seeds, nuts and vegetables. Over and above that, beekeepers make another R8.64 million per year hiring out hives to farmers, while a further R13.9 million comes from fynbos honey. While 80 per cent of the Province's hives depend on eucalyptus trees for honey production, which are 'alien' to this location, having been brought here from Australia, they are entirely dependent on fynbos for foraging throughout the winter months. Without fynbos, Western Cape agriculture would be seriously compromised. Suddenly the need for its conservation takes on a whole new importance, does it not? I doubt, too, that anyone has calculated the value of the increased productivity and saved medical expenses of all those people who enrich their mental and physical wellbeing by hiking the fynbos-covered mountains of the Cape.
These figures may be contentious but, for the sake of argument, let's use them as a rough estimate to prompt us to think about value next time we lose ourselves in a thousand-yard stare across a natural landscape. It would be impossible to replace the services with which nature provides humanity. But, if this is not sufficient to persuade decision-makers to act, perhaps this will be: our own extinction could be just beyond the horizon.