The Tugela River in the Drakensberg 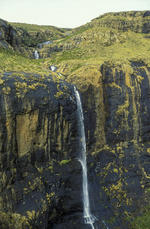 ©Roger de la Harpe
The Tugela Falls in the Amphitheatre.

The Thukela (more commonly known as the Tugela) River rises as a chilly and pure stream from a seepage 'sponge' on the slopes of Mont-aux-Sources. About one kilometre from its source on the summit plateau of the Drakensberg, it plunges in three giant leaps over the massive Amphitheatre wall.

The falls crash into a boulder-cluttered chute and then cascade through a forested gorge where a deep incision has been cut into the softer sandstone at the base of the basalt mountains. The water here is rich in oxygen from its tumblings over falls and rapids, racing with youthful exuberance. Like newly fallen rain water it has a high percentage of dissolved oxygen but it is virtually free of silt, which is why mountain water tastes so good. 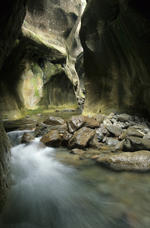 The Tugela is good for drinking but cannot sustain much life. No large plants can grow in the river's upper reaches because of the low nutrient content of the water and the river’s abrasive action, nor many algae because little light reaches through the sylvan umbrella of the forest to aid photosynthesis. All the life here consists of insects and micro-organisms that are able to withstand the high water velocity.

Most common are insect larvae which creep under rocks, burrow into the stream bed, or crouch low within the boundary layer on the bottom where the flow is slowed down by friction. Leaves from forest trees float down and settle on the surface of these pools, where they become waterlogged and sink to form a leaf mosaic on the bottom. Here they are colonized by bacteria and fungi and these are in turn consumed by tiny snails and molluscs that cling to the undersides of rocks.

Where the Thukela emerges from the gorge the valley floor widens a little and here it loses much of its energy. Medium-sized boulders that have been rolled down from the gorge are deposited in a braided pattern near the gate of the Royal Natal National Park. From here the Thukela flows through the foothills, is swelled by numerous tributaries and flows out across the Natal Midlands as a stately, mature river.

Trees still grow along its banks but more sunlight reaches the water, which flows less swiftly and forms quieter pools and backwaters where plants can take root. The main inhabitants here are still insects, but their numbers and diversity have increased. A new food-web is evident here, with live green plant material at the base of the trophic pyramid rather than detritus, although fallen leaves still form a large part of the nutrient pool.

Less stressful conditions, warmer water and more food allow the animals in the middle reaches of the river to grow faster and generally larger than in the gorge. Dragonflies and damselflies alight on reed stems that overhang the stream and giant water bugs hunt tiny fish and even small frogs in the water, injecting dissolving enzymes into their prey and sucking out the liquidized animals, leaving behind only the crumpled skins. Bugs like Lethocerus cordofanus can grow up to 10 centimetres long on this protein-rich diet.