There were still a few days left at Tswalu before I was due at my next destination, a game ranch where I was to hunt for the utterly impossible pangolin.

The plan was to join a young zoologist doing research for his Masters. He had attached transmitters to a few of these creatures, and was tracking them on a nightly basis. But the real prize would be to find one for myself in the wild without the help of telemetry. So I set Jolyon the task of bagging a pangolin.

Needless to say, the expression on his face suggested he’d accidentally swallowed a shongololo. Top-end safari lodges such as Tswalu pride themselves on catering to a guest’s every need, no matter how outlandish or demanding. And I needed a pangolin.

‘As a matter of fact, Tswalu is probably the best place in South Africa to find one,’ said Jolyon. ‘However, before you get your hopes up, be aware that I’ve only seen five in all the years I’ve worked here.’ Five is a lot more than most field guides see in a lifetime. Jolyon and William agreed to give it a concerted and single-minded bash. The rest of my stay would be focused exclusively on finding a pangolin.

On the Hunt for Pangolin

The following morning, we set off into a dawn decorated with purple clouds, searching for pangolin tracks. William watched the road and surrounding dunes, his eyes scanning like radar. He missed nothing as he skim-read the early-morning edition of The Kalahari Times, printed in the sand. Tracks. We got out and gathered round.

I could clearly see the five digits of the hind feet, the intermittent scrape marks of the tail and the occasional indentations of the forelimbs, which pangolins mostly keep clear of the ground while walking. William took a walkie-talkie from the console and set off following the spoor, while Jolyon and I drove in a square pattern to see whether the animal had crossed up ahead.

A call came through on the walkie-talkie. William had found a promising burrow. Jolyon grabbed his rifle and we walked over a dune to where William stood beside an aardvark hole. Jolyon got down on his hands and knees, shining a torch into the mouth. ‘I’m scared of two things when I put my head down a hole: angry snakes or the burrow collapsing on me,’ he said.

‘You two better be ready to pull me out by my legs, hey!’ Jolyon levered himself in, head first, and soon only his feet showed above ground. Down the rabbit hole, just like Alice, I thought. After a few moments, he backed out, his body coated in red sand. ‘It goes very deep, and turns a corner,’ he said, taking out his GPS and marking the coordinates.

‘I think he’s down there. We could try to dig him out, but that’s unethical. He’s not likely to budge during the day and will probably emerge after sunset to forage. Let’s come back this evening and stake it out.’

Back at the hole after an early supper, the spoor told us our pangolin had already left the burrow. ‘Damn it,’ muttered Jolyon. ‘They hardly ever appear before sunset, and never on a hot summer’s day. What’s with this guy? We’ll just have to try and follow the tracks.’ This was going to be a severe test of William’s skill.

Following the spoor of the Kalahari’s most elusive mammal, at night, through tall grass, was surely a bridge too far, even for the finest of trackers. Nevertheless, we set off into the darkness behind William. Our soft-spoken guide seemed to be in his element.

He would walk a little way, back-track, stand thinking for a while, then head off in a different direction altogether, as though somehow divining pangolin. It was fascinating to watch him and Jolyon at work. Not a word was spoken. The merest nod or hand gesture was enough as they zigzagged across the dunes.

The rest of my time at Tswalu followed the routine of early morning and night-time searches. We found plenty of tracks, and Jolyon stuck his head down many a scary hole, but the pangolins remained aloof. On my last day at Tswalu, we embarked on one final, concerted hunt. Among the dune streets to the west of Motse, in the shade of a line of silver cluster-leaf trees, William again found tracks, and we followed them to a burrow.

Both men assured me the pangolin was definitely in residence. This time we weren’t taking any chances. We would return long before sunset to stake out the hole. Later that day, we were back. While William kept an eye on the burrow, Jolyon laid out a fancy picnic supper of roast beef, sosaties and salad, washed down with icy Windhoek lagers. We sat in camp chairs watching the afternoon bleed into a fiery sunset.

©Nigel Dennis
Barking gecko emerge from a burrow at sunset.

Supper finished, we went to relieve William. Jolyon and I found comfortable patches of sand near the mouth of the burrow. We remained completely silent, willing the creature to poke its nose above ground. A full moon rose, drenching us in pseudo-sunlight.

A wildebeest snorted close by. Lightning flashed on the horizon, too far away to offer any thunder. The moon unpicked itself from a thorn tree. Hours dragged by and the sand grew uncomfortable. Was our quarry really down there, or had it slipped out during a moment of inattention? Eventually, in the early hours of the morning, we gave up.

Maybe the pangolin had foraged well the day before and didn’t need to emerge that night. Perhaps it had heard us and decided to lie doggo. The stakeout was a big let-down, and Jolyon appeared visibly disappointed. ‘I’m a professional,’ he grumbled. ‘I should be able to get this little guy.’ ‘Don’t cut yourself up about it,’ I said. ‘They’re supposed to be just about impossible to see. There’s a good reason why no-one tracks them.’ ‘Ja, I know, but still—’

Southern African ground pangolins "Smutsia temminckii" are strange, prehistoric-looking creatures. Their bodies are covered in an armour of heavy brown scales, making them appear more dinosaur than mammal. The scales are made of fused hair, similar to rhino horn or human fingernails.

They walk on their hind legs, using their tails for balance. The head is tiny and the muzzle tapers to a point with smaller scales continuing along the snout. Under ideal conditions, adult males can reach a length of more than a metre and weigh up to eighteen kilograms.

They are secretive animals that spend up to twenty hours a day underground, usually in abandoned aardvark burrows. Their long, curved front claws are sharp and used to open ant nests during feeding. Pangolins have no teeth, but in their place are narrow raised ridges of bone.

Their insect prey is swallowed directly into the muscular stomach, where it’s ground up with the help of grit and sand simultaneously ingested. Pangolins are solitary foragers and predominantly nocturnal. They are perfectly adapted to their environment and have been around for forty million years, which puts the 0,4 million of Homo sapiens nicely into perspective.

The Southern African ground pangolin is one of a family of nine. It has cousins in China, India and Malaysia, as well as two small tree-climbing relatives and a big brother – the giant pangolin – in Africa. Ground pangolins are sparsely distributed in regions that abound with ants and termites across Southern Africa and up into East Africa as far as the Sudan. Humans are the creature’s principal enemy.

Apart from habitat loss through development and farming, pangolins are also used in traditional medicine and considered a delicacy in the Far East. With the rapid decline in the four Asian species, foreigners are moving in on the African species. Local threats are just as serious. For instance, in traditional Shona culture, any pangolin found is to be killed and presented to the chief: only he is allowed to eat such a delicacy. 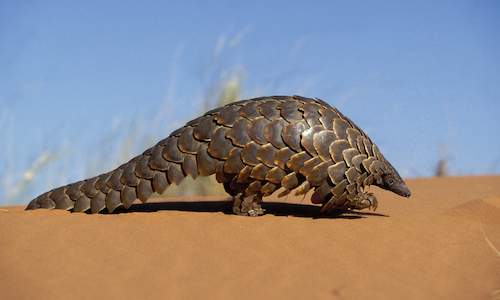 Pangolins can be found in South Africa in northern KwaZulu-Natal, Mpumalanga, Limpopo and parts of North West. It can also be found in Zimba...more
©2022 South Africa Online (Pty) Ltd. SouthAfrica.co.za. All Rights Reserved.