The Makuleke and the Kruger National Park

The park authorities had to break a number of eggs to make the Kruger National Park omelette. This included the forced removal of many African communities that originally lived inside the park’s borders.

The park would shrink, human development would encroach, and the sustainability of the ecosystem would be threatened. It’s a thorny problem – what do we do when something good has been created from something bad? How do we redress the wrongs without undoing the rights?

Fortunately, SANParks is actively participating in these negotiations and working to find mutually acceptable solutions for all the stakeholders. And it seems to be working. One claim has already been successfully settled, and it is being used as a blueprint for the others. To find out more, we must travel to the far north of the park to meet the Makuleke people.

The Makuleke are a Tsonga-Shangaan tribe who moved into the Pafuri region sometime during the 18th century. Their lands were located between the Luvuvhu and Limpopo Rivers, on the border between South Africa, Zimbabwe and Mozambique. Part of their domain included the lawless piece of land known as Crooks’ Corner, and they were once active in the region’s ivory trade.

In 1903, the land between the Letaba and Limpopo rivers was incorporated into the Shingwedzi game reserve. Overnight, the Makuleke had become ‘tenant farmers’. As the population grew, however, it was decided to remove the Makuleke. The chief, Mhinga, refused to budge so the authorities decided to move the border of the reserve south to the Luvuvhu River, thus cutting the problematic villagers out of the protected area.

At this time, the borders of the reserve were not fenced and the vast Shingwedzi region did not have enough rangers and native ‘police boys’ to patrol effectively. So, the Makuleke soon began moving back and forth across the Luvuvhu; causing the authorities a great deal of concern. In the 1930s, it was decided that the Makuleke had to go and a piece of Kruger National Park land to the south was earmarked for resettlement.

Caught in the Middle 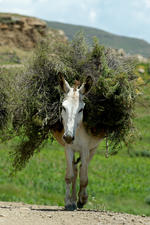 ©Shem Compion
Only donkeys were allowed.

The community put up a spirited defence, and they found support from an unlikely source - the Department of Bantu Affairs. This was because the Department was constantly pushing for land on which they could establish native settlements and they resented all the good ground being taken up by the ‘worthless’ game reserve. The Parks Board was determined, however, and they approached the Transvaal government for help.

The provincial authorities obliged by declaring a new ‘Pafuri Game Reserve’, which surrounded (but did not include) the Makuleke land. Still, Bantu Affairs refused to authorise the relocation of the tribe. The Makuleke were literally caught in the middle and the stalemate lasted for years. It was an impossible situation and deeply unfair to the Makuleke. Throughout the 1940s and 50s, the Makuleke lived in limbo.

They were not allowed to keep cattle, goats or sheep; only donkeys were permitted. This was because domestic herds could bring anthrax and foot & mouth disease into the park. It was also a useful way to ensure that the Makuleke could not hunt game for the pot and claim it was beef. As a result, the Makuleke ate little meat and had to buy most of their supplies from a small store run by John Fernandez. 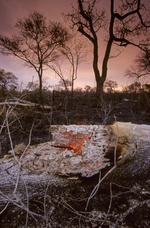 By the 1960s, everyone wanted the Makuleke to go, but they refused to budge. Finally, in 1969, the old chief died and the government moved in. According to Lambson Makuleke, “They came at gunpoint and they gave people matches to burn their own houses.” Altogether, about 300 Makuleke living in ten villages were relocated to Ntlhaveni, to the south-west of Punda Maria gate.

The Pafuri game reserve was then incorporated in the greater Kruger National Park. Ntlaveni later became part of the abortive ‘homeland’ of Gazankulu. After the first democratic elections in 1994, the new government announced that any communities that had been forcibly moved from their traditional lands under apartheid could register a land claim. The Makuleke decided to do just that and lodged their claim in 1995.