The Sobantu Floods of September 1987

A Refugee at Home

Bongiwe Mkize is a forgotten refugee. She was driven from her home by a band of thugs, her house torched because the political colours she flew were different to theirs. Like so many in her community of Henley, outside Pietermaritzburg, she fled.

©Leoine Joubert
Bongiwe Mkize, a refugee of the violence that tore the Natal Midlands apart in the 1980's

Bongiwe's escape washed her up 10 kilometres away to the verge of a muddy little spruit which trundles down through an industrial hub outside Pietermaritzburg. This water is fouled with soapy and greasy factory effluent and the trickling filth from broken sewage pipes upstream.

A handful of people have erected their wattle-and-daub homes on the northern bank of the Baynespruit River, and most of them, like Bongiwe, are the casualties of war. She may not fit the United Nations' definition of refugee, because she was not been forced across any national boundary and hasn't been given official asylum by any foreign state, but in the end it's just about semantics.

She fled from one municipal ward to another in the hope of finding sanctuary and the forces driving her there were just the same as if she'd fled a national conflict. 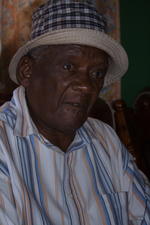 Natal, in the 1980s, was a war zone, and 1987 was the bloody climax. What sinister interplay of underlying tensions was able to foment into the kind of conflict where communities turned on each other with such bewildering viciousness, has filled reams of history books.

But, writes Black Sash commentator Anne Truluck of the 3 200 deaths and the 100 000 people leveraged from their homes by the violence between January 1987 and mid-1992: "Statistics on deaths, incidents, homes destroyed and persons displaced serve to hide the human face of the war - the random killings, sudden mid- night attacks, large-scale massacres; the dead children and mutilated women; the long night marches of the late 1980s by men and youths trying to protect their communities and their families; the refugees forced to move on from place to place, abandoning everything they possessed."

Most historians agree that a culmination of factors had corroded the social networks which would normally have held these communities in healthy stasis. Decades of social engineering by an apartheid state, within an industrialising economy, produced a migrant labour system which deposited so many black South Africans unceremoniously on many cities' fringes, often in urban squalor or unisex hostels.

The loss of traditional home structures, of churches and extended families, the moral nurseries into which healthy individuals could grow, were torn apart. Traditional law enforcement within the emerging townships, locations and squatter settlements were ignored by a policing system that wasted its time on enforcing petty apartheid rules instead of dealing with real crime within communities.

Massive unemployment prevailed (some 40 percent in these parts, according to Truluck, quoting the international Commission of Jurists of 1992) and a hopelessly inadequate Bantu education system. A struggling proletariat found itself with inadequate housing and expensive public transport to ship them the considerable distances between their homes and their jobs. 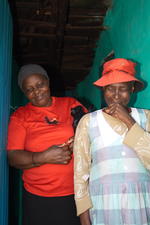 ©Leoine Joubert
Mrs Nxumalo (red top) who lives in a one bedroomed house with her adult son in the same informal settlement, with her neighbour Jean Wood (red hat)

Then, into this mire, the first death throes of a state that was losing its hold on the country. Historian, professor John Aitchison, explains that the formation of the United Democratic Front (UDF) in 1983, in response to the National Party's latest move to formally exclude black South Africans from government in the form of a new tricameral parliament, arrived at a time when there was already considerable and growing conflict between inkatha (today the inkatha Freedom Party or lFP) and other liberation parties.

Since its inception in 1975, inkatha had a "low key (but) stabilising presence" in the Natal Midlands, writes Aitchison, and had been on good terms with the banned and exiled African National Congress (ANC).

But history recalls a schism developing between the parties in 1979, one which caused the more radical youth - one which identified with "the exiled liberation movement and the leaders on Robben Island" - to feel a sense of alienation from Inkatha.

The growing divide between the UDF and Inkatha, and a radical and out-of-control youth, manifested aggressively in tit-for- tat killings and mutilations, and turf struggles. A lack of tolerance for any opposition in the Natal Midlands culminated in a vicious implosion of escalating bloodshed.

Violence on the loose

In September 1987, all hell broke loose. A series of events conspired to bring an upwelling of violence that marked this month as a particularly bloody chapter in the ongoing conflict. Between March and August 1987, murders had already climbed to "an average of 14 a month", but in September, 59 people died as lines were drawn more clearly between UDF and Inkatha strongholds.

This was a war that raged in the streets where children played and in the homes where families slept. There was no separation between combatant and civilian. Local political leaders were often warlords and ordinary people became vigilantes. Running battles continued where communities should have been kept safe by the state and its police - instead the state conspired to let this violence run loose.

Then the heavens opened

John Wright, retired KwaZulu- Natal history professor, recalls that dreadful month. "At the time they (the floods) seemed completely incidental. The violence in the Pietermaritzburg area flared up precisely in mid-September 1987.

Two weeks later came those unprecedented rains, three and half days of them. Funerals were postponed, bodies were washed out of graves and down the (Msunduzi) river.

Then the rains stopped and people - and the police - went back to fighting and killing one another, for another three or four years." It is unclear when on this timeline Bongiwe Mkize and her family were pried from their Henley home or when they finally settled on the edge of the Baynespruit River, but just across from where their house is now, is one of the oldest and most established of Pietermaritzburg's townships: Sobantu. lt is set snugly in the fork where the mighty Msunduzi River (meaning "the pushing force of the water") meets the Baynespruit.

The Force of Water

©Leoine Joubert
One of the many Sobantu residents whose home was completely lost under the flood waters of 1987.

Days of steady rain saturated the catchments, spilling downhill into the streams which feed into these two rivers. Rivulets began to swell, as their banks were forced to accommodate more and more water, slowly becoming torrents.

When the rushing waters met at the confluence of the two rivers, the bottleneck forced the muddy waters to push back across the floodplain on which part of Sobantu is built. Before long, the expansive girth of rising waters was lapping up against row upon row of houses. Finally, even the steeple above the three-storey high, red-brick church at the entrance to the Sikhosana Road cul-de-sac was lost under the water.

Fortunately for the residents of Sobantu, the waters rose while most were away at work or school, backing up slowly and steadily to engulf well over a hundred houses. Had the flood been different - had the waters torn through in a rapid surge, as sometimes is the case with floods - the result would have been quite different and bricks-and-mortar houses would have been ripped apart by the force of the water. 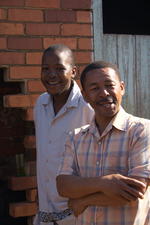 The rest of the then Natal Midlands and Durban area were similarly broadsided by the flooding and the 1987 event has gone down in history as a bad one. State organisations struggled to count the number of people displaced or dead. Newspaper headlines in the Natal Witness and the Echo ran almost daily tolls but often qualified their figures as underestimates.

While it may be contentious, there is also some indication that the floods helped fuel the violence. inkatha, at the time, was attempting to recruit aggressively in many townships and villages. Aitchison says one theory put forward argues that "people in the Msunduzi Valley were so fed up after the damage and inconvenience of the floods that the inkatha recruiting drive was the last straw and they fought back against coercion".

Alternatively, he says, "corruption in the distribution of flood relief aid led to anger at inkatha and KwaZulu structures and in turn led to resistance to recruitment". Either way, whether the floods were responsible in some way or not, the viciousness continued. Another 83 people living in and around Pietermaritzburg lost their lives to the bloody conflict. What, if anything, does this have to do with climate change?