A Symbol of Righteous Resistance

San Francisco has Alcatraz, and Cape Town has Robben Island. This rocky little lump in the ocean off Cape Town is much, much more than just another famous prison.

It is a symbol of righteous resistance, of awful oppression and of triumphant tolerance. It’s also one of Cape Town’s premier tourist attractions. Today, a trip to Robben Island is tragic and uplifting at the same time. Although the early Dutch Settlers ate most of the seals that gave the island its name, Robbe is Dutch for ‘seals’, Robben Island is an emotional touchstone for the nation and a tacit lesson for the planet as a whole.

Most people visit the island because of its relationship to Nelson Mandela, but it has a long history of housing famous political prisoners who were condemned to years of bleak incarceration, far away from the land of their birth. For example, in the mid-1800’s several Xhosa chiefs, like Maqoma, Stokwe and Mhala, were imprisoned here as a result of their refusal to accept the British domination of their homelands in the Eastern Cape.

Then, in the 20th century, Robert Sobukwe, the founder of the Pan Africanist Congress, spent so many years alone in a little house on the island that his speech became impaired. And, in the 1970’s, just about every major black political activist spent some time on the rock. Back in those dark days, who could have predicted that the prison roll call would one day sound like the minutes of a cabinet meeting? 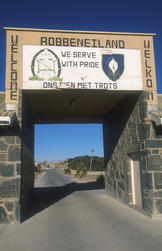 Although its isolated proximity to the Cape made it a natural place to put people who weren’t wanted, Robben Island wasn’t always a prison. It’s true that obstreperous Khoikhoi were sent here by the Dutch, but the island was also used as a leper colony for a time in the 19th century, and it has also served as a whaling station, and as a naval base during World War Two.

But it is Nelson Mandela who has given the desolate little island its enduring place as a World Heritage Site of cultural significance. The 27 years that our beloved Madiba spent behind bars in this brutal facility are a testament to the strength of the human spirit, and a reminder of what can be accomplished by the righteous.