©Leonie Joubert
Marion Island, showing the last vestiges of snow on the peaks.
In the 1970s scientists working on Marion Island, deep in the sub-Antarctic, would trek on foot into the island's hinterland and ski down the volcanic slopes above the snowline. They remember the white-capped cones floating on a perpetual sea of ice and snow. Today the highpoints of Marion Island remain chilly and inaccessible reaches, but now black lava and red scoria peaks have replaced the frosty landscape. The tongue of ice, the last vestige of a glacier, has retreated into the lava. A steady rise in mean temperature has slowly eroded the ice plateau. Over three decades it has steadily melted, dripped into the scoria, and refrozen inside the porous rock.
Marion's coastline is spread with deep, peaty mires. These smelly bogs were notorious for swallowing people up to their waist, armpit or even neck. Today they are drying out and becoming shallower. Now a walker who loses concentration while navigating the mires will only go in up to the knee. One of the grass-like plants, Uncinia compacta, which prefers drier mires, is spreading faster than ever before. A heat-sensitive plant, the rare Kerguelen cabbage, is retreating to the cooler south-facing slopes as its numbers succumb to fungus, rising temperatures and competition from other plants that are thriving in a changing system. Records going back to the early 1950s show an increase of 1.5°C in the mean annual temperature. Rainfall is down by 25 to 30 per cent over the same period. If you happen to be looking for a smoking gun, it's right here. Marion Island is being squeezed like a sponge by the fist of global warming. 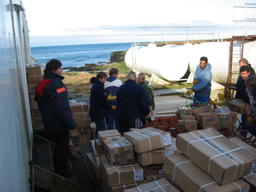 ©Leonie Joubert
South African scientists on Marion Island preparing their camp.
South African scientists have been studying Marion island closely for the past half century; in fact, it has become something of a living laboratory. A small, weather-beaten research base on the eastern, leeward side of the island houses a team of meteorologists, biological scientists and support staff. Every year in March the SA Agulhas powers down into the treacherous Southern Ocean to collect the previous year's team, deliver a fresh group, and replenish the base's pantries. In 2003, a team of researchers headed down expressly to look at how global warming is manifesting itself in that system.
The Prince Edward Islands consist of two volcanic mounds, Prince Edward and Marion, that jut out of the southern Indian Ocean at 46° South, 37° East. Speaking of their isolation, author John Marsh said: “Nature seems to have been at pains to maintain the exile of its orphan islands by creating between them and the inhabited lands of the Earth the barrier of the 'Roaring Forties'. In this zone that circles the Earth just to the north of the domain of the 'Westerlies', the wind is never still or constant in direction, and the sea invariably reflects its restlessness. Fog and ice add to the dangers that confront mariners venturing into such high latitudes. They keep well clear of them unless there is good reason to go that way.”

©Leonie Joubert
King Penguins on Prince Edward Island.
The islands first made it onto the charts in 1663 during the early exploration forays into the Southern Ocean. Once the world's nautical frontiersmen began the race to find the last great continent, which geographers of the day said must cling to the underbelly of the planet - the 'anti' or counterbalance to the North Pole's Arctic,exploration of the region began in earnest. One captain, thinking he had finally discovered Antarctica in 1772, called the larger island Ile de l'Esperance (the Isle of Hope), and the smaller one nearby Ile de la Caverne (the Island of the Cave).
Realising his mistake, and probably somewhat miffed that he may have missed his chance to discover the only remaining continent, the captain settled on Ile des Friodes (the Frigid Islands), and turned his offended back on them. They later became the Prince Edward Islands, with the larger called Marion and the smaller Prince Edward, but much of the Southern Ocean's history was eclipsed by the excitement of Antarctic polar exploration. Nevertheless, there are a handful of tales about castaways, shipwrecks and occasional deaths as the world's demand for seal blubber, penguin eggs and guano kept people trekking down to this isolated, cold, wet little place.

©Leonie Joubert
Marion Island's weather station and research facilities.
It was only in 1948, after World War II, that South Africa laid claim to the Prince Edward Islands. Weather forecasting in the Southern Hemisphere had become the hot topic as the scientific community had figured out that this was the world's weather factory. Post-war insecurity was another strong motivator. The development of long-range missile technology meant that possible enemies of the former Allied states could control substantial shipping routes around the southern tip of Africa, even attacking South Africa if they gained control of these islands and installed their missiles. In 1948, the Prince Edward Islands went from being a hellish little archipelago to really sought-after property. The South African navy SAS Transvaal slipped out of Cape Town harbour late in December 1947 and headed south to annex the islands in Operation Snoektown.
Settlement at 46° 54 South and 37° 45 East was never going to be easy. The first visitors to Marion said: “The island consisted of a lava rock base covered with a layer of decayed soggy vegetation many feet thick, with a carpet of luscious green Azorella and tussock grass as a top dressing. The ground was swampy and the going most arduous.”
The mires are legendary. One of its first inhabitants described Marion as 'really a bog on top of a rock'. The first settlers were prohibited from walking beyond a four-mile radius of the new base because they believed it was simply too dangerous. A man - because only men went on the early ventures to the Prince Edward Islands - could easily become stuck in a mire and be unable to pull himself out if he became 'bogged in the muddy surface'.
Eventually, after several hurried trips by the South African navy to put buildings in place 'before the winter storms cut them off from contact, except by radio, for the best part of six months', a rudimentary base was open for business. It had meant struggling against 'gale upon gale, rain, sleet, snow and bitter cold', but the base had just enough room for twelve men and their meteorological and radio stations tucked away on the leeward side of the island.
Half a century later, the base on the island is a rabbit warren of prefabricated buildings joined by raised catwalks. Since the first construction in 1948, it has been added to and replaced so many times that it is starting to look like an old shirt that has been mended too many times - eventually little of the original fabric remains and that which is there is faded and frayed at the edges. The buildings leak. The wind shakes them so ferociously that some people have complained of motion sickness during bad weather. Even the bunk beds sway when the westerly picks up. Some buildings have been blown away. For those who work here, far from the conveniences of the modern world, it is a small sacrifice to make to enable them to study the island's unique plants and all the strange animals that rest, nest and haul themselves out onto Marion's beaches. It's like living in a Petri dish.

Voyagers of the South

If modern humans had been around a million years ago and had created the means to traverse the oceans, intrepid voyagers of the south could have sailed right through this point on the map without as much as a scrape to the keel of their boat. They would simply have found more of the Southern Ocean's unbroken and perpetually churning waters. But, at that time, our ancestors were just learning the nuances of stone tools and negotiating their way out of Africa and into Asia and parts of Europe. It took many generations before we populated most of the continents and figured out that the Earth was a globe around which vessels could be sailed. Some time between 500 000 and one million years ago, the ocean floor below this point on the charts split open and bubbled with escaping gas and magma. Slowly, over the millennia, a submarine mountain range formed as layer upon layer of lava poured out and cooled itself over and over again. Eventually, one of its peaks scaled the 4.8 km3 above the sea floor, pushed through the ocean's surface and continued climbing. That, if you can imagine, is how Marion Island was born. A few hundred thousand years later, Prince Edward joined it.